The movie "Habermann" tells the tragic tale of the Germans and Czechs living in the Sudetenland from the day the Nazis marched in until the Germans were expelled after World War II. That history remains a touchy topic. 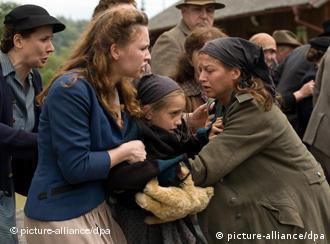 The expulsion and murder of the so-called "Sudeten" Germans by war-weary Czechs after World War II traumatized the German-Czech relationship. Decades later the two countries are both part of the European Union and share an open border. Yet the fate of the three million Sudeten German expellees has remained a sensitive topic.

"Habermann," a Czech-German-Austrian film playing in European theaters this fall portrays the suffering of the Germans in Czechoslovakia after World War II for the first time. The film's Slovakian director, Juraj Herz, is himself a survivor of the Holocaust. He's attempted to make a balanced film that is fair to both sides, casting a critical, yet sympathetic eye.

The Sudetenland refers the western border regions of then-Czechoslovakia that were inhabited mostly by ethnic Germans.

A history that spares no one

The film opens with a dramatic scene from 1945: the violent expulsion of the Germans by a mob of murderous Czechs.

Less than a decade before, the title character August Habermann, a successful German owner of a lumber mill, married the Czech Jana. She's half-Jewish but doesn't know it. Habermann sees himself as an apolitical Sudeten German.

But just one year later, on September 30, 1938 the day he and his wife are celebrating their daughter's baptism, the Nazis enter the Sudetenland, changing everything. 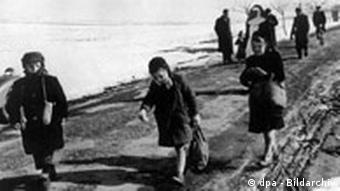 As the war wages on, the once pragmatic Habermann finds himself trapped by both sides of the conflict. He tries again and again to protect his wife and his Czech employees and friends. But the pressure under SS unit leader Kurt Koslowski and the other Nazis only grows.

When Habermann's best friend, the Czech Jan Brezina, is implicated in the murder of two German soldiers, Koslowski vows to take revenge and even tries to get Habermann to help him.

In the end some Czechs' basest instincts of revenge and resentment take over in a retaliation that spares no one, not even the innocent Habermann.

The film has its weakness, but what director Herz achieves is the depiction of a rarely told story with dramatic images. With scenes of the bloodthirsty Czech mobs and the Germans forced to wear the letter "N" to mark themselves as "Nemec," Czech for German, he draws parallels with the persecution of the Jews under the Nazis.

"It's not necessarily about feeling guilty," he says. "It's about dealing with a part of history."

Human remains discovered by archaeologists in a field near the Czech town of Jihlava are believed to belong to local ethnic Germans murdered by vigilante groups towards the end of the Second World War. (19.08.2010)

After decades of neglect during the communist era, a group of students in the Czech Republic has taken the initiative to fix up some of the Sudetenland's cultural monuments. Topping the list: a historic dance hall. (30.05.2010)

Critics have questioned the role of ethnic German expellee communities forced to leave their homes after World War II. As the Charter of German Expellees turns 60, the groups have reasserted their presence. (05.08.2010)