New EU Parliament Meets in Strasbourg | Europe | News and current affairs from around the continent | DW | 20.07.2004

The EU's newly elected parliament met for the first time in Strasbourg on Tuesday, voting in Spaniard Josep Borrell as its new president and bringing together the 10 new member states for their first vote in parliament. 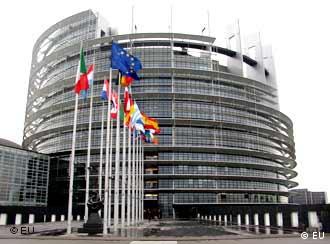 25 flags fly in front of the Parliament in Strasbourg now.

Borrell, a 57-year-old Spanish Socialist, is now to lead the European Parliament for an expected two-and-a-half years. A total of 388 of the parliament's 732 members voted for the candidate, who was selected as part of a power-sharing deal between the two biggest parties in parliament.

The Christian Democrat-aligned European People's Party and European Democrats in the European Parliament (EPP-ED) and the Social Democrat-aligned Party of European Socialists (PES) agreed that after two-a-half years, the midway point of the current legislative period, Borrell would be replaced by a member of EPP-ED -- most likely the party's current leader, Germany's Hans-Gert Pöttering.

However the liberal and Green parties criticized the deal. "It is idiotic," said Daniel Cohn-Bendit, leader of the Greens group in parliament. "The only use in it is to ensure that Hans-Gert Pöttering becomes president in 2.5 years." Pöttering has not confirmed or denied that he will take the position.

Criticism also came from within Pöttering's own party over the apparent horse trading. Borrell's only close competition on Tuesday, liberal Polish member of parliament and co-founder of the labor movement Solidarity, Bonislaw Geremek, received 208 votes, including those from some in the Socialist and conservative camps.

Meanwhile, among the new faces present in the new parliament was an increasing number of euro-skeptical parties or even parties that would like to see the dismantling of the EU and its institutions, like the League of Polish Families or the UK Independence Party. But these parties have so far failed to band together into a faction, ensuring that their influence in the parliament's activities will be limited.

Saying he was "appalled by what he had seen at his first day of work," Robert Kilroy-Silk, who leads UKIP, told reporters his party would seek to derail the parliament's work on Tuesday. "We will do everything we can ... to obstruct and delay legislation," Kilroy-Silk told reporters. "A politically united Europe, this is for me a nightmare."

The leading voice in parliament will remain the conservatives, with their 268 seats, followed by the Social Democrats, with 200 seats, the Liberals with 88 and the Greens with 42. 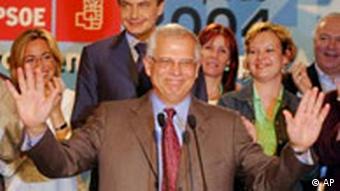 Josep Borrell makes his debut in Strasbourg as president of the European Parliament.

Borrell (photo), who has served as a Spanish cabinet-level minister, but never as a member of parliament, pledged in his acceptance speech to represent the interests of all parties and to make ratification of the new European constitution his biggest priority.

"I will do everything I can to accommodate the ratification of the constitution," Borrell said. "That counts especially for the countries where critical referendums are lined up."

Among his other priorities are implementing new regulations to overhaul the parliament's loose system of per diem payments and expense and travel regulations, which has led to abuses in recent months that have drawn criticism in Germany and elsewhere in the EU.

On Thursday, the European Parliament, which represents 25 EU member states, will convene again to confirm the new president of the European Commission, the most influential position in the Union. Only one candidate is currently seeking the post: Portuguese Prime Minister José Manuel Durao Barroso. His approval is also expected to be the result of a pact between the Social Democrats and conservatives.

Josep Borrell's election as the European Parliament's new president topped the agenda in Strasbourg Tuesday. Although the longtime politician never served in parliament before, he is now leading it. (July 20, 2004)

The official homepage of the European Parliament, with links to member pages, legislation and reports.