New Delhi′s new anti-corruption bill is burned by activists | Asia| An in-depth look at news from across the continent | DW | 04.08.2011

The Indian government has introduced an anti-corruption bill over which social activists are furious as it exempts the prime minister from the scrutiny of a powerful ombudsman. 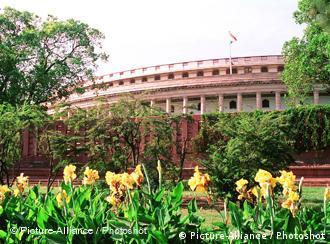 The controversial Lokpal Bill introduced in Indian Parliament on Thursday, August 4, promises to create a new anti-corruption watchdog where citizens can file complaints about officials, including federal ministers and senior bureaucrats who are shielded under India's current laws. It has also sparked criticism by the opposition and activists angry over its lack of power to combat graft. 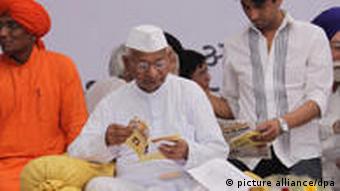 The new anti-corruption watchdog will consist of a chairperson and eight members, half of them judicial, and it will have its own prosecution and investigation wing with officers and staff necessary to carry out its functions.

The final version of the bill has been strongly criticized by civil society activists, who were allowed to participate in the drafting process but complained that their views were marginalised. In particular, they attacked the decision to remove sitting prime ministers and the higher judiciary from the ombudsman's purview. The conduct of MPs inside parliament is also exempt. But once the prime minister demits office, he or she may be investigated for any wrongdoing during the term.

Every public servant will be made to declare his or her assets and liabilities under the bill. In case of default or misleading information, it will be presumed that the said public servant acquired the assets through corrupt means. The legislation can also recommend transfer or suspension of public servants connected with allegations of corruption. 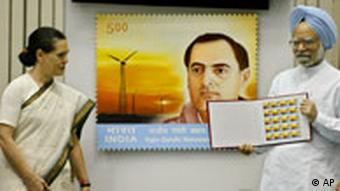 The bill comes against the backdrop of a series of corruption scandals involving ministers and high officials and a movement led by veteran social activist Anna Hazare. The 73-year-old, who has been pressing the government for a "strong and effective" ombudsman, had gone on a hunger strike in April to protest government inaction on corruption.The 98-hour hunger strike led to nationwide protests in support of Hazare.

Anna Hazare has urged all MPs to reject the legislation and has given the ultimatum that he would go on fast against the latest version of the Lokpal Bill, arguing that the final draft reveals the government's empty promises. While the bill was being introduced in parliament, he symbolically burned a copy in the western Indian city of Pune and said he would start a new fast on August 16.

India has a dismal record of bringing corrupt senior public officials to justice. Current laws require the government's approval before any sitting bureaucrat or minister can be prosecuted.

Anna Hazare has launched a nationwide campaign in support of a citizen's ombudsman bill drafted by legal experts from civil society. He will refuse food until the government enacts a comprehensive anti-corruption law. (05.04.2011)

Baba Ramdev, India’s most popular and powerful yoga guru, has vowed to fast unto death to fight corruption. His critics believe his fasting is politically motivated. (03.06.2011)