A Saxon state court has ruled that a bridge project in Dresden, approved by referendum in 2005, should go ahead despite warnings that the modern structure would disqualify Dresden from UNESCO's World Heritage List. 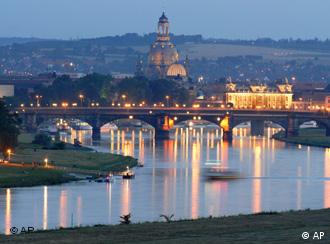 Residents of Dresden were tired of traffic jams, and, in February 2005, they voted in favor of building a new bridge across the Elbe River Valley -- a project that had been on the table for nearly a decade already.

The following year, UNESCO said it would consider removing Dresden from its list of 830 world heritage sites if the project went ahead, saying that the modern bridge would have "a serious impact on the integrity of the landscape" of the city.

City leaders in Saxon's capital then tried to back-pedal on the 160 million euro ($211 million) bridge project, but their efforts were stalled by Tuesday's court decision that the 2005 plebiscite approving the bridge must be upheld.

UNESCO has not reached a final decision on the future status of the Elbe River Valley. The World Heritage Committee is set to discuss the matter in late June, at a conference in New Zealand.

The head of the German UNESCO Commission, Walter Hirche, has appealed to the federal government to "establish the conditions necessary for the consequential inter-state implementation of the World Heritage Convention," reported German news agency DPA.

Though Dresden is now required to begin contracting construction companies, the city council may appeal to Saxony's Constitutional Court, the state's highest judicial body, according to reports.

If so, the final word on what takes priority -- the decision of Dresden's voters or Germany's pledge to UNESCO -- has yet to be spoken.

Dresden was largely destroyed by Allied bombing during WWII, but much of it has been reconstructed, such as the Frauenkirche (left)

Just days after UNESCO removed Cologne Cathedral from the endangered list of World Heritage sites, the Dresden Valley is placed on it. Plans to build a bridge threaten the valley's natural beauty, says the cultural body. (12.07.2006)

UNESCO's world heritage program is known for protecting buildings or places such as Cologne's cathedral or the Rhine River Valley. But a new convention has taken effect to safeguard intangible heritage as well. (20.04.2006)

Stretching over 2 kilometers, the bridge was funded by the EU and built by a Chinese firm. The bridge links two parts of Croatia divided by a stretch of Bosnian territory on the Adriatic Sea.