A new book released in Poland claims that former Solidarity leader and Nobel laureate Lech Walesa was a communist spy. The allegations have sparked curiosity among Poles, and have some up in arms. 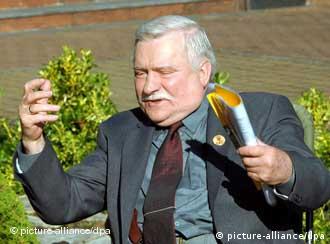 Hundreds lined up outside Warsaw bookstores on Monday, June 23, to snatch up copies of the 700-page book, written by historians Slawomir Cenckiewicz and Piotr Gontarczyk.

The book claims to have new evidence that Walesa was an informer for Poland's communist-era secret service from 1970 to 1976 while working at the Gdansk shipyards. He allegedly used the code name "Bolek."

"Life is complicated sometimes," said co-author Gontarczyk, as reported by German broadcaster ARD. "He was a young deckhand then. And according to our documents he started to work for the secret police in the 1970s.

"No one is questioning that that he's one of the most important figures of the 20th century," he added.

Court had declared Walesa not guilty

Walesa, who served as president of Poland after the fall of communism from 1990 to 1995, has denied the allegations and called the institute's authors "fanatics" with libellous claims. He has threatened legal action and said he will soon release his own book to tell his side of the story.

Although similar rumors have circulated for decades, the book brought the debate to a head and has sparked controversy in Polish politics.

Walesa became a hero worldwide after he led a strike at the shipyards against Poland's communist regime in 1980, helping bring down communism at the end of the decade. He was awarded the Nobel Peace Prize in 1983.

During his presidency in 2000, Walesa won a court ruling that said he was not a spy. But opponents, including Polish President Lech Kaczynski, say they know he had worked for communists.

Many see the allegations as tactics used by right-wing politicians for political gain. In a recent survey conducted by Polish daily Dziennik, 43 percent said they did not believe the former president worked with the secret police.

Former Solidarity activist Wladyslaw Frasyniuk said, according to ARD, "People who spit on history and its authorities are just riffraff. These people haven't done anything to achieve an independent Poland."

Jan Baraniecki was one of the few who managed to get a copy of the book on Monday before they sold out. He said he wasn't interested in finding proof of Walesa's innocence or guilt.

"For me it's not important if he was an agent or not. I want to read the book," he said. "There's been too much discussion and only 4,000 books printed. Someone wants to hide something so Poles won't know the whole truth."

Several prominent Cold War-era politicians and diplomats have called for Berlin's Checkpoint Charlie to be accompanied by a museum dedicated to the tense period of East-West relations. (18.06.2008)

Burglars snatched a coal briquette and other "worthless" items from a former East German secret police headquarter building. But the stolen goods could peak the interest of collectors. (05.05.2008)

About one in 100 East Germans was an informer for communist East Germany's secret police in 1989, according to a new study. Political ideology was their main motivation, both in East and West Germany. (11.03.2008)

In December 1970, Polish workers rose up against a food price hike. Authorities reacted brutally, killing dozens. These experiences shaped the later Solidarnosc movement, which helped to bring down the communist regime.