The shitstorm targeting Berlin's new theater director, former Tate Modern chief Chris Dercon, has been both digital and quite literal. Instead of bailing, he launched the Volksbühne season with an unusual 12-dance show. 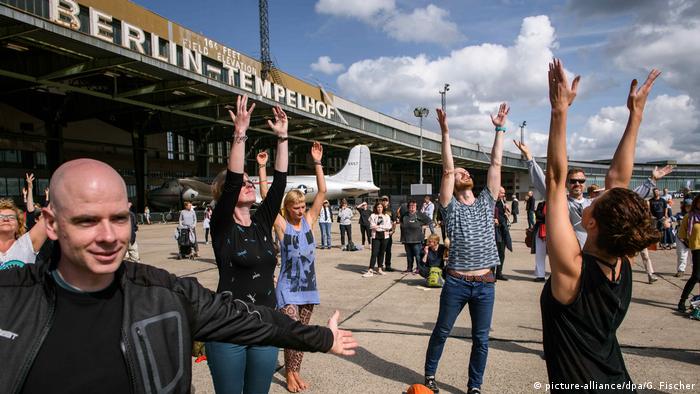 It was an open invitation to go crazy about dance: "Fous de danse - All Berlin Dances at Tempelhof" was Berlin's Volksbühne kick-off event held on Sunday.

The space right by Hangar 5 at the former Tempelhof airfield became a huge dance stage. Apparently undeterred by two years of public outrage following the appointment of a new director for the legendary Berlin theater, the Volksbühne decided to open up its arms and reach out to the entire city for the first event under Chris Dercon's watch.

Dercon had to endure ranting and trolling on social media, as well as a petition against him signed by 40,000 people. The shitstorm was not only virtual, however: When fresh feces were left every day in front of his office at the beginning of August, he started considering leaving Berlin, the new director told DW. 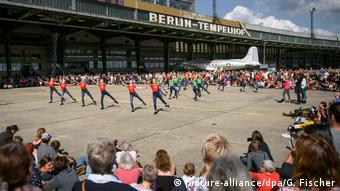 The cultural war surrounding the Volksbühne had reached new peaks of vulgarity. The theater with a strong left-wing tradition on Rosa Luxemburg Square had been directed by Frank Castorf for 25 years before being handed over to the Belgian museum expert and former head of London's Tate Modern.

Dercon aims to establish a new profile for the Volksbühne, as an international art platform going beyond theater and including dance, performance and experimental acts. Opponents couldn't suffer to witness the end of Castorf's signature ensemble.

Read more:  Curtain comes down on Frank Castorf's era at the Volksbühne

After all those hateful actions and intimidation attempts, it's almost a miracle that the season of the "new" Volksbühne is actually taking place. 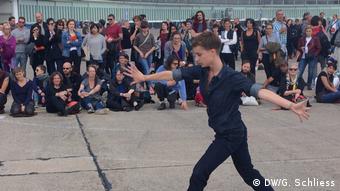 Young Turkish performers were also part of the event's program

Another miracle: A festive atmosphere surrounded the 12-hour dance marathon conceived and directed by French choreographer Boris Charmatz. Nothing of the past years' tension could be felt during the event.

Thousands of people came to dance and watch dance performances, to take part in discussions or simply have fun with family and friends.

Boris Charmatz is the director of the Centre chorégraphique national de Rennes et de Bretagne – a safe number for Dercon. Charmatz's concept of the "virtual dance museum" sees a museum in the human body, as it records not only personal memories but those of society as a whole.

The choreographer experiments by bringing together dancers and the audience, as he did during the warm-up workshop at the beginning of "All Berlin Dances." His natural charm and authority led the audience to get moving.

Dance in all of its forms

That established a special atmosphere that could be felt throughout the day. The following acts, from over 17 cooperation partners of the Volksbühne, demonstrated what's now possible in dance.

The young women of the youth ballet of Berlin's state ballet school presented with natural elegance the classic "Le Corsaire," without wearing a traditional tutu, but rather jeans and sport shoes. 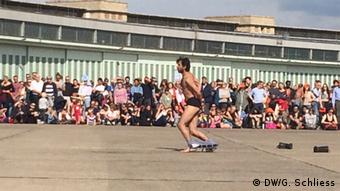 The last note of Adolphe Adam's music hadn't faded away yet when the beats of the dance company Flying Steps called the audience to move onto the next performance, a few steps further. With their urban dance, the young talents' wild hip hop battles provided a completely different energy.

The next act courageously countered with an absolutely silent performance. In white clothes and sneakers, four dancers created 40 complex circular figures, moving around with long steps and swinging arm movements.

This minimalist space experiment was as captivating as the performance by Syrian dance Mithkal Alzghair, whose choreography "Displacement" deals with civil war and persecution, ending with him enfeebled and scantily clad, collapsing on the tarmac.

A winning point for Dercon 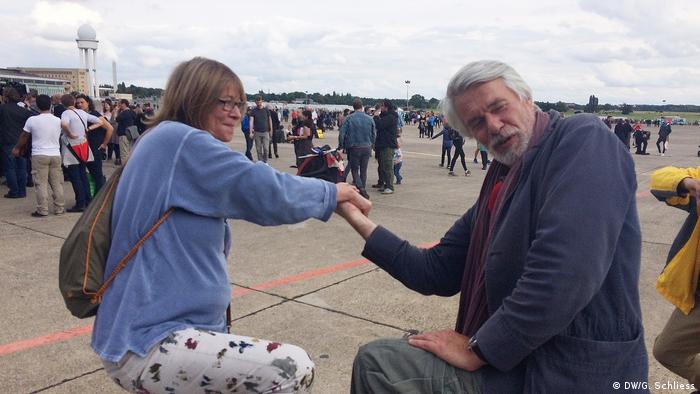 Chris Dercon (right), new director of the Berlin Volksbühne, won this round of arm wrestling

Chris Dercon's first serve was successful. It will not disarm his opponents, but it will at least provide him with urgently needed supporters.

The new director is bound to face more criticism until he manages to establish his own Volksbühne signature amidst the tremendous diversity of his artistic propositions – but it's only fair give him some time to achieve that.