German officials say that the prototype has set a new record on a single charge. BMW and Volkswagen have also said that they will sell their first electric cars within three years. 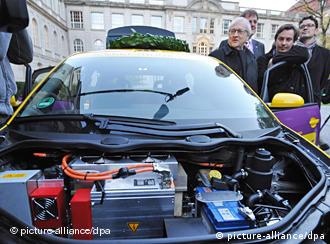 The Audi A2 arrived in Berlin after a 600 kilometer trip

On Tuesday, a prototype of a new all-electric Audi A2 car completed an early morning 600 kilometer (372 miles) drive from Munich to Berlin on a single charge.

"If any journalists want to charge up their iPhones, we still have some electricity left," quipped driver Mirko Hannemann, 27, just after completing the seven-hour journey.

Company representatives say that the four-seater has a recommended speed of 130 kilometers per hour, and has many of the same features of other cars, including power steering, airbags, air-conditioning and even heated seats.

Automobile manufacturers working on electric cars have been hampered in the past by their limited range compared to hybrid- or combustion-engine vehicles. 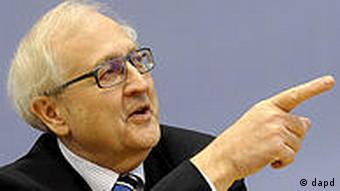 "Before, electric cars could typically only go 60 or 70 kilometers before recharging," he said at a press conference at the economy ministry in Berlin, where the car arrived. "This is a technological leap forward."

While Japanese researchers at the Japan Electric Vehicle Club have driven an electric car around a test track for 1,000 kilometers (620 miles), the companies behind the battery technology in the Audi A2, lekker Energie and DBM Energy, say their car has travelled the farthest distance as an "everyday" vehicle.

The German government and industry have been forging ahead with electric cars - in May, German Chancellor Angela Merkel hosted an electric car summit in Berlin, and has previously said that her government wants to have one million electric cars on the road by 2020.

On the industry side, both BMW and Volkswagen have announced that they will sell their first electric cars in 2013.

Currently, eight regions around Germany are working on building 2,500 charging stations to support the 2,800 test vehicles.

"We are convinced that electric mobility works in everyday life," said Nicola Bruening, the head of BMW's office in Berlin, in an interview with the German business magazine, Wirtschaftswoche (Business Week).

Opel announce new small car range to be made at Eisenach

The production of a new line of subcompact cars by manufacturer Opel will take place in the Eisenach plant in Thuringia. The contract for the production of ‘Junior’ will see 90 million euros invested in Eisenach. (23.09.2010)

In Germany – home to BMW, Daimler and VW – energy company RWE plans to help a Chinese company launch its electric cars. The move could pressure German carmakers to ramp up mass production of their own electric vehicles. (17.09.2010)

Oliver Kuttner's 320 kilogram car gets 102 miles per gallon of fuel, or 43 kilometers per liter. He and the Edison2 team will be formally awarded the prize at a ceremony later today in Washington, D.C. (16.09.2010)