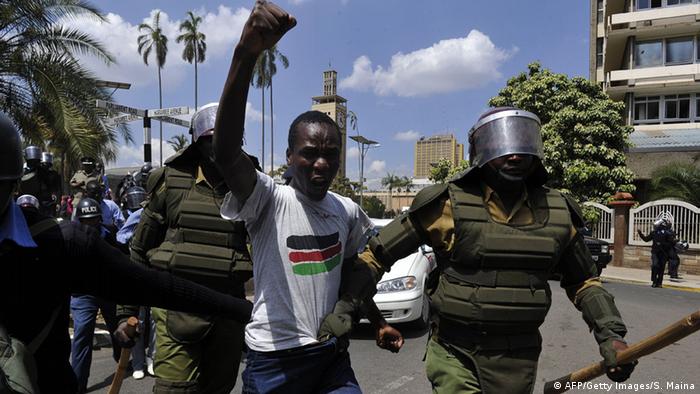 "The dignity, the integrity of parliament is at stake. The cameras of the National Assembly will bear testimony to what I am saying," Aden Duale, the majority leader from Kenyatta's Jubilee coalition said.

The measures were approved in parliament although the "Aye" responses of ruling party members marking the adoption of various articles could barely be heard amid loud booing from the opposition benches.

The new laws mean suspects will be liable to be held without charge for 360 days, rather than the previous 90 days and sentences for those convicted will be lengthened. Landlords will be compelled to provide information about their tenants and investigators will be given more powers to tap phones. Media organisations will be punished if they print material that is deemed "likely to cause fear or alarm."

Large fines or a three-year jail-term or both face journalists whose stories are deemed to undermine terror investigations. Similar fines will be incurred by media organizations which publish pictures of terror victims without the permission of the police.

During the debate, journalists were barred from the chamber and television footage was discontinued during the vote. Speaker Justin Muturi had already suspended the morning session after opposition legislators shouted him down.

President Uhuru Kenyatta has been under pressure to improve security since the attack on Nairobi's Westgate shopping mall in September 2013 by Somali al Shabaab insurgents in which 67 people were killed. "There is nothing to fear about the bill unless you have been engaging in criminal activities," Uhuru said.

Earlier this month, the country's interior minister and police chief were removed from their posts after gunmen carried out killings in the northeast of the country.

Diplomats representing the United States, Britain, France, Germany, Canada and Australia, said in a statement on Wednesday said they supported plans to improve security but that human rights should also be respected. "It is important that the legislation, while strengthening security, respects human rights and international obligations," they said.

"Protecting Kenya's constitution and upholding civil liberties and democracy are among the most effective ways to bolster security," the joint-statement read.

There was a heavy police presence in the city center during the vote on Thursday and police fired warning shots in another part of the capital where pro-opposition youths had blocked the road. Eight peaceful protesters were arrested outside parliament buildings.

Somalia's government has said terrorists could retaliate against the killing of the country's al-Shabab leader in a US airstrike. Officials said the warning was based on 'credible intelligence.' (06.09.2014)