The German stock exchange's market for growth and technology stocks, the Neuer Market, celebrates its fifth birthday March 10. But in the market’s current doldrums, the next year may not be one to grow on. 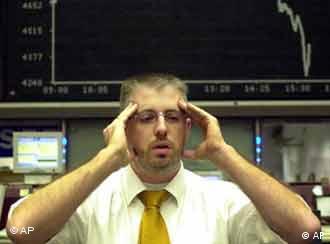 The Neuer Markt has been the cause of many a headache

It once rose dramatically but has since fallen just as far.

Germany’s premier stock market for growth and technology stocks, the Neuer Markt at the Frankfurt exchange, peaked in March 2000 when its broadest index, the Nemax All Share, hit 8,599 points.

Offering European tech entrepreneurs opportunities to raise capital on an unprecedented level, the Neuer Markt performed like a dream until the world economy turned and talk of a "tech bubble" burst investor confidence.

Now with the Nemax All Share just below 1,000 points – less than an eighth of its peak level – the market’s future looks a lot harder.

Ironically, the Neuer Markt’s excruciating 19-month fall ended just ten days after September 11 last year. Markets around the globe plunged after the terrorist attacks against the United States, but they rebounded shortly thereafter.

The Neuer Markt, typically more sensitive to investor euphoria and fear than many older markets, bounced back impressively, from a Nemax All Share low of 694 points to above 1,250.

But hopes that the bounce would be as dramatic as the market’s original long climb above 8,000 never developed.

Investors are more careful in the struggling Germany and European economies, injured by America’s slump. Since November the Neuer Market has been sliding slowly down again.

It could hardly be another way. The Neuer Markt’s long-term viability is not in question, investors say, as a part of the powerful Deutsche Borse. But tech-stock growth – indeed the whole concept of a tech-rich, info-driven "new economy" less subject to market cycles – no longer sparks the investor confidence it did half a decade ago.

Take the case of LetsBuyIt.com. Once one of Europe’s leading online retailers, LetsBuyIt is listed on the Neuer Markt, where sales helped the company raise $180 million.

But as market fortunes have changed, the stock has plunged, and this week the company announced radical downsizing, cutting its workforce by 60 percent and declaring bankrupt its deeply indebted Swedish operations.

High-profile public relations disasters such as this, affecting the Neuer Markt’s indices, have a cumulative confidence-killing affect on investors – just as they have on the NASDAQ in New York.

Hurrah, the Neuer Markt is five years old. But not much can be known of its future until the world economy works through its current period of uncertainty and more is known about the fundamental value of tech stocks.