Following an initial vote count, Israeli Prime Minister Benjamin Netanyahu and his Likud party look set for victory, ahead of the center-left Zionist Union. A win would mean a third term in office for Netanyahu. 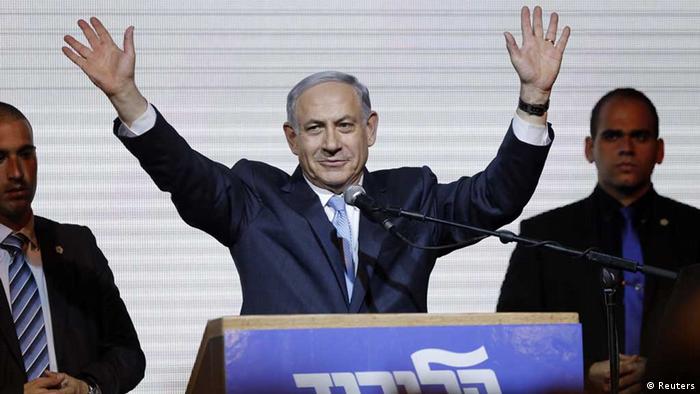 After counting 70 percent of votes in the Israeli election, the Central Elections Committee said early on Wednesday morning that Likud was leading with 23.73 percent of the vote, and the Zionist Union was lagging behind with 19.06 percent.

Following exit polls on Tuesday evening, Netanyahu already declared victory for Likud. Earlier, Israeli television polls for Channel 10 and Channel 1, said Likud and the Zionist Union had each secured 27 seats in the 120-member Knesset. Channel 2 gave Netanyahu a narrow edge, with 28 to 27.

Netanyahu said he had already begun calling potential partners as he prepared to form the country's next coalition government.

Ahead of Tuesday's vote, Netanyahu vowed to protect Israel from an Iranian nuclear threat and to never allow Palestinians to establish a capital in east Jerusalem - effectively turining his back on his 2009 endorsement of a two-state solution.

The Palestinian Authoriy warned, however, that they intend to step up their diplomatic campaign for statehood.

"It is clear that Prime Minister Benjamin Netanyahu will form the next government, so we say clearly that we will go to the International Criminal Court in the Hague and we will speed up, pursue and intensify," all diplomatic efforts, chief negotiator Saeb Erakat said.

Under Israel's electoral system, the prime minister is not the head of the party which wins the most seats, but whoever can form a coalition commanding a majority of at least 61 seats in parliament.

Questions over Netanyahu as polls close in Israel

Polls have closed in Israel. Millions of people have cast their votes in parliamentary elections that could oust Prime Minister Benjamin Netanyahu from office. (17.03.2015)

Israeli elections: It's the economy, stupid!

Will Israelis vote with their wallets as security fears take a backseat to economic alarm? Punishing housing prices and costs of living are threatening to tear Israel's social fabric, according to some economists. (17.03.2015)

Benjamin Netanyahu is struggling to hang on to power as the center-left Zionist Union is mounting a strong challenge in parliamentary elections. About 15 percent of voters are undecided according to polls. (17.03.2015)