Steffi Nerius capped off her career with a rousing victory in the women's javelin throw final in Berlin on Tuesday. At the end of this season, she plans to retire. 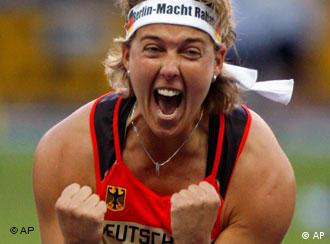 Her gold-medal performance provided a memorable end to the 37-year-old veteran's eighth World Championships. Nerius had never won a major worldwide competition; Tuesday proved to be her night.

She threw a season's best mark of 67.30 meters to beat defending and Olympic champion, Barbora Spotakova of the Czech Republic (66.42m), while Maria Abakumova of Russia took the bronze (66.06m).

Nerius's victory gives Germany their first gold medal of the competition. Previously, the German team had collected two silvers and a bronze.

Three Germans in the final

Although she was one of three German women competing in the javelin final, only Nerius made it to the podium. But first, she basked in the adoration of the assembled onlookers in Berlin, savoring the thrill of the moment. 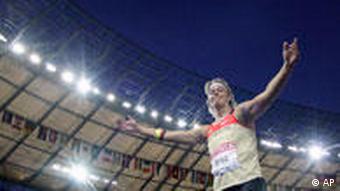 "This is gigantic, I don't know what to say," she told German broadcaster ZDF. "I never dreamed this would happen."

Nerius added that her win would not make her reconsider her decision to retire in the fall.

On the track, runners competed in the finals of the men's and women's 400 meter hurdles, as well as the men's 3,000 meter steeplechase.

Kerron Clement of the United States defended his title in the men’s hurdles, while Jamaica’s Sanya Richards took home her first world title on the women’s side of the event.

"Finally, I have own a major title! Finally the hard work has paid off,” said Richards, who had had trouble winning in major finals, despite being the dominant 400m hurdler over the past years. She failed to qualify for the 2007 worlds and then tired dramatically on the home stretch at the 2008 Olympics to finish third.

In the 3,000 meter steeplechase, Ezekiel Kemboi finished in front, edging out his countryman Richard Kipkemboi Matelong by half a second. 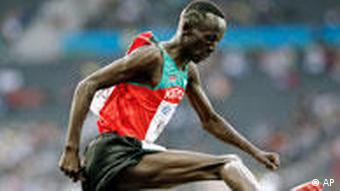 Even closer, however, was the race for third. Frenchman Bouabdellah Tahri snatched bronze, and finished just eight tenths of a second ahead of Paul Kipsiele Koech. Had Koech been a touch faster, it would have been a Kenyan sweep of the medals.

The world championships’ reigning superstar Usain Bolt was also in action on Tuesday, easing into the semifinals of the 200 meter dash.

He finished his heat in 20.41 seconds, a time that two other runners in other heats had already bested. As ever though, Bolt seemed unworried.

"I feel a little tired," he said. "I am taking it round by round, but in the final I will be running hard."

It was Bolt's sixth race in four days, including his stunning 100 meter performance on Sunday night in which he set a new world record of 9.58 seconds. Thursday will see Bolt go after his own record in the 200 meters, 19.3 seconds.

The highlight of day two of the World Track and Field Championships in Berlin was without doubt the men's 100 meters. Three-time Beijing Olympic champion Usain Bolt smashed his own 100 meter record by 0.11 seconds. (16.08.2009)

German athletes produced some good results and a bronze medal on the first day of the the 12th International Association of Athletics Federations (IAAF) World Championships. (15.08.2009)