As the search for survivors continues, Nepal's government has declared three days of mourning. More than 4,000 people died in the massive earthquake at the weekend, with eight million affected across the region. 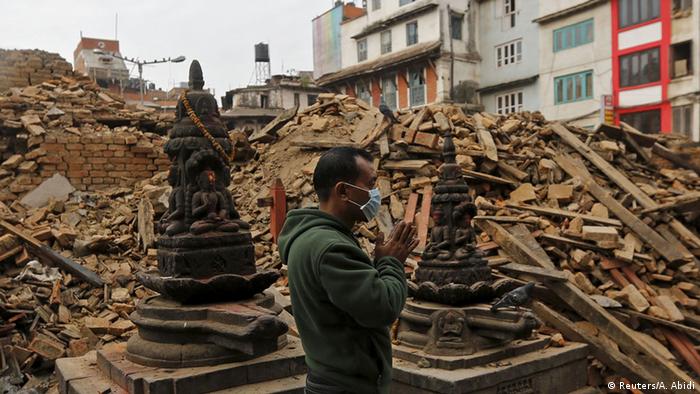 Nepal's Deputy Prime Minister and Home Minister Bam Dev Gautam, said on Tuesday that the government in Kathmandu was going through "a difficult time in dealing with the crisis, in terms of its limited resources."

"We were not prepared for a disaster of this scale," Gautam said.

"We do not have enough resources and will need more time to reach out to everyone."

According to Nepal's home ministry spokesman, Laxmi Prasad Dhakal, the official death toll has risen to 4,310, with a further 7,953 known to have been injured.

Earlier on Tuesday, the United Nations (UN) said that eight million people have been affected by the 7.8 magnitude quake which struck the country's capital on Saturday - the country's worst in 81 years.

"According to initial estimations and based on the latest earthquake intensity mapping, eight million people in 39 districts have been affected, of which over two million people live in the 11 severely affected districts," the latest UN report said.

An international aid operation is now under way to help those left homeless and with few or no supplies.

Germany, China and Pakistan are among several countries which have sent aid, rescue workers and medical teams to devastated sites across the stricken Himalayan nation.

Nepalese troops in the small town of Gorkha were on Tuesday also readying food, water and emergency suples to send to the most rural areas affected by the quake.

"They are cut off by road slides on the mountain roads, and the wind and rain is making it difficult for helicopters to land," district official Surya Mohan Adhikari said.

Saturday's quake also triggered a huge avalanche on Mount Everest. It is believed to have been the worst single disaster on the world's highest peak, killing at least 17 climbers and guides.