The trial of one the world's most notorious Holocaust deniers, Ernst Zündel, was postponed shortly after it started on Tuesday in the German city of Mannheim. The judge dismissed two members of Zündel's defense team. 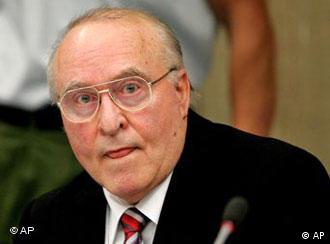 Zündel faces up to five years in prison

If convicted on charges of inciting racial hatred, Ernst Zündel could be sentenced to five years in prison. But the trial, which started on Tuesday in the German city of Mannheim, was postponed after Judge Ulrich Meinerzhagen ruled that Horst Mahler, a member of Zündel's defense team, could not participate in the proceedings.

Mahler, who in the 1970s was associated with the far-left movement, has since become a vociferous proponent of far-right, anti-Semitic ideology. He was disbarred last year and sentenced to nine months in prison in January for provoking racial hatred.

Judge Meinerzhagen also dismissed Zündel's publicly appointed defender Sylvia Stolz on the grounds that her written submissions to the court reflected the ideas of Horst Mahler. Although the defendant said he was satisfied with the rest of his defense team and did not need a publicly appointed defender, the judge ruled that a new public defender should be appointed. The trial will resume on Nov. 15.

Zündel has been a leading Holocaust denier for more than two decades. The 65-year old German left his home country at the age of 19 and emigrated to Canada where he soon came under the influence of leading North American Neonazis.

In the 1970s, Zündel set up Toronto-based "Samisdat Publishing," which soon became one of the world's main distributors of Nazi propaganda and memorabilia. Through this company he issued his book "The Hitler we loved and why," along with countless leaflets carrying with titles such as "Did six million really die?" 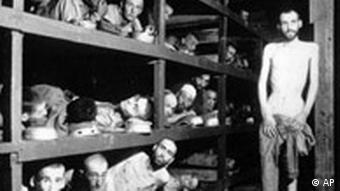 Zündel denies that millions were murdered by the Nazis

His repeated denials of the Holocaust resulted in several trials in Canada, where authorities convicted him of "knowingly publishing false news" in 1988. Only four years later the Canadian supreme court, however, overturned the ruling, decreeing that it violated freedom of expression.

Anti-Semitism via the Internet

In 1995 Zündel took his propaganda to a new level when he became the inspiration and the key content provider of the the so called "Zündelsite," a leading online forum of Holocaust denial and anti-Semitic propaganda. 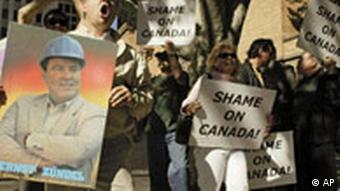 Zündel supporters protested against his extradition

Through the Internet, Zündel's anit-Semitic theories could be easily accessed and read from anywhere in the world, including Germany. This eventually prompted German authorities to pen a case against the Holocaust denier on charges of inciting racial hatred.

It was only this year that Canadian authorities finally agreed to his extradition, opening the way for Zündel trial in Germany.

"In 1993 denial of the existence of the Holocaust became a crime in Germany," said Wolfgang Kapust, a journalist and specialist on the subject. "Since that time German prosecutors can -- in fact must -- intervene in such cases."

Kapust added that the prosecution of Nazis, Neonazis and Holocaust deniers has been quite successful since then. 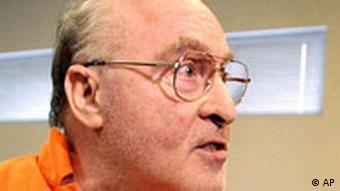 Zündel in Canadian detention in 2003

While Zündel is on trial in Germany, his Web site is, however, still spreading anti-Semitic and right extremist propaganda. Operated by his American wife and webmaster, Ingrid Rimland, the US-based website can still be accessed, promoting Zündel's "letters from the cell" and calling for donations to support him.

The trial against Ernst Zündel was scheduled to last five days, with a verdict originally expected to be delivered on Nov. 24.

Right-wing extremist Ernst Zündel is due to arrive in Germany on Tuesday. Canada, his adopted home for two-thirds of his life, is extraditing him to face a German court in his country of birth for denying the Holocaust. (March 1, 2005)