As the NSU murder trial resumed for the first day in 2018, many relatives of the murder victims were in the courtroom. After more than a decade waiting and over 400 trial days, a verdict is finally in sight. The "National Socialist Underground" is accused of carrying out ten murders and two bomb attacks in which more than 20 people were wounded, as well as 15 robberies. So it's not at all unusual that the NSU trial before the Higher Regional Court in Munich is taking so long – four years and eight months at this point. Tuesday marked day 402. Many of the almost 100 joint plaintiffs were there in person, including the mother-in-law and son of the NSU's first victim.

Enver Simsek died on 11 September 2000 after being seriously wounded two days earlier, presumably by Uwe Böhnhardt and Uwe Mundlos. The 38-year-old florist was in his mobile stall when nine shots were fired at him at close range. Eight of the bullets hit him, five of them in the head. The Simsek family's lawyer, Seda Basay-Yildiz, summarized every detail of the course of events as reconstructed by the police in her closing remarks. 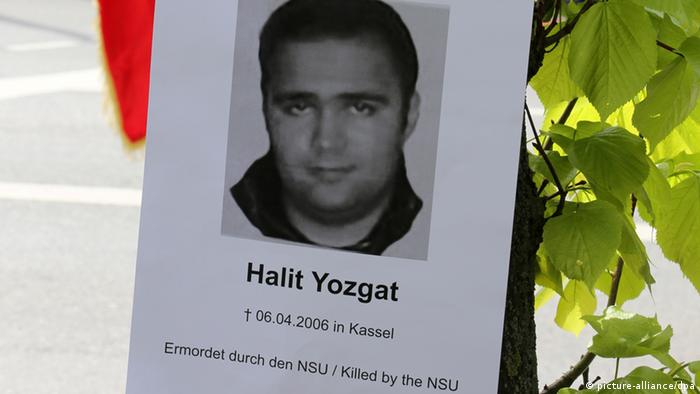 Picture of the dying victim on video

Above all, though, Basay-Yildiz made note of the degree of suspicion the NSU victims' relatives were subjected to for years. The investigators believed Simsek might have been involved in drug-dealing, and excluded the possibility of a racist motive. This pattern was repeated again and again, until April 2006, when Halit Yozgat was shot in his internet café in Kassel with the same gun – a Ceska – as Enver Simsek had veen six years earlier. Yozgat was the ninth victim. The last was Michèle Kiesewetter, a policewoman, who was murdered in Heilbronn in April 2007. She was the only victim who didn't have foreign roots.

It was only when the NSU exposed itself in November 2011 after a failed bank robbery in Eisenach that the true motives for the sinister series of murders became known. The principal defendant, Beate Zschäpe, had sent the video with photos of the dead or dying victims. Her two friends Mundlos and Böhnhardt, who are suspected of carrying out the killings, escaped arrest by committing suicide.

The joint plaintiffs' final summing up began in mid-November. This has taken 16 days so far. Seda Basay-Yildiz's remarks are among the last. Like almost all her colleagues acting on behalf of the plaintiffs, she criticized the biased thrust of the investigations. This accusation is justified, as numerous parliamentary committees of enquiry have clearly shown. After Enver Simsek's murder, sniffer dogs were brought in to search for drugs in and around the family, and their phones were tapped for months.

The TV program "Aktenzeichen XY… ungelöst," which publicizes unsolved crimes, theorized that the victim may have known his killer, and suggested that he was part of the drug-dealing criminal underworld. The Simsek family's lawyer painted a picture of a seemingly never-ending chain of misjudgments and omissions. She summarized what has already been said over the course of the often long-drawn-out hearing of evidence in the NSU trial. She also compared her clients' experiences to that of a former member of the intelligence service who played a dubious role in the Yozgat murder case. 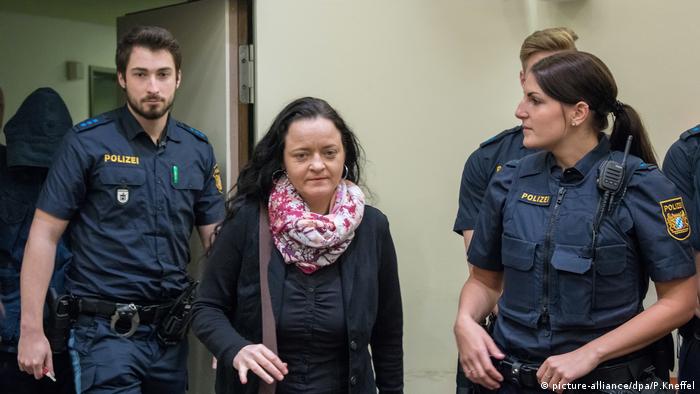 Beate Zschäpe, the defendant in the murder trial, enters court on the 402nd day of proceedings

The personal rights of the victims and their families

Andreas T. was present when Yozgat was shot in Kassel. Case files that might incriminate him remain sealed, on the grounds that opening them would infringe his personal rights. "What about the personal rights of the victims?" Basay asked in court on Tuesday. As she was about to continue her summing up, after a break, the presiding judge, Manfred Götzl, adjourned the proceedings until Wednesday, because Ralf Wohlleben, who stands accused of obtaining the murder weapon, had back pain.

In the autumn of 2017 the public prosecutor called for Wohlleben to be sentenced to 12 years' imprisonment, and for Zschäpe to be given a life sentence with subsequent preventative detention. When the joint plaintiffs' summing up comes to an end – which may be this week – it will be the turn of the defense attorneys for the five accused. Verdicts are expected to be handed down in the spring.

The neo-Nazi organization's crimes and the issues they raised are already an established focus of contemporary and artistic analysis. Last Sunday, Fatih Akin's film "In the Fade" won a Golden Globe in Hollywood. The drama is based on story of the NSU murders, and has been showing in German cinemas since the end of November. An estimated 335,000 people have seen it so far.