Neither side backing down as Hong Kong protests continue

Hong Kong's leader has said the government will not back down in the face of pro-democracy street demonstrations. Organizers have pledged to step up their protests unless their demands are met. 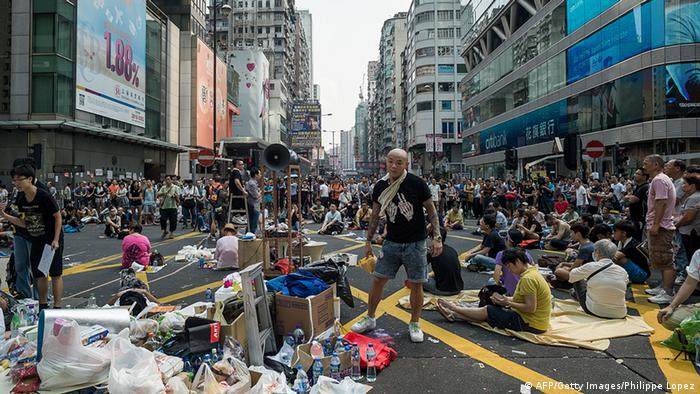 Hong Kong Chief Executive Leung Chun-ying on Tuesday called on the demonstrators to end their protests, accusing the main group behind the pro-democracy rallies, Occupy Central of being "out of control."

"Occupy Central founders had said repeatedly that if the movement is getting out of control, they would call for it to stop. I'm now asking them to fulfill the promise they made to society, and stop this campaign immediately," he said.

Leung also said there was no chance of him stepping down or of Beijing rescinding last month's decision to reserve the right to decide which candidates appear on the ballot in a 2017 election to choose a new chief executive.

"The central government will not be coerced into submission because some people have used illegal actions," Leung said.

Leung also rejected the demonstrators' calls for him to step down.

The protesters, many of whom remained in the streets throughout the night and into Tuesday, responded by repeating their demands.

"If Leung Chun-ying announces his resignation, this occupation will be at least temporarily stopped in a short period of time, and we will decide on the next move," a co-founder of the Occupy Central movement, Chan Kin-man said.

The secretary general of the Hong Kong Federation of Students, which organized the university class boycotts that led to the protests, called on Leung to meet with them on Tuesday.

"If Leung Chun-ying doesnt come out to Civic Square before midnight ... then I believe inevitably more people will come out onto the streets," said Alex Chow, adding that students were considering options including expanding the protests, pushing for labor strikes and possibly occupying a government building.

Occupy Central had earlier announced that it had set a Wednesday deadline for Leung to step down and that if he failed to do so, it would escalate the protests, using China's national holiday to bring even more people out onto the streets.

"I think there will be a massive turnout, over 100,000 people tonight and leading into National Day," Occupy Central activist Ed Chin told the AFP news agency.

Monday night's protests were reported to have been peaceful, a day after police used tear gas on protesters. Police said they were forced to take action in response to protesters attempting to push through barricades.

The demonstrations, some of which have blocked main junctions in the city, have caused disruption to traffic and schools in some parts of Hong Kong remained closed on Tuesday.

Thousands of protesters in Hong Kong have spent another night out on the streets to back up their demands for more democracy. They have also threatened to step up the demonstrations if their demands aren't met. (30.09.2014)

Hong Kong remains paralyzed as tens of thousands of people have taken to the streets in protest. With Britain now weighing in, China is keeping a close eye on the swelling democracy movement. (29.09.2014)