As co-author of a new book called "Das Amt und die Vergangenheit" ("The Office and the Past"), US historian Peter Hayes of Northwestern University has gained insight into German diplomats involvement in Nazi crimes. 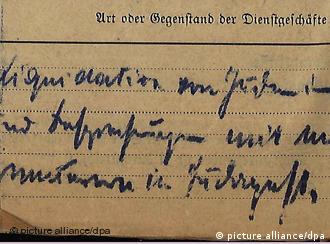 Deutsche Welle: One would have thought that 65 years after the end of World War II everything had already been said about the involvement of the German Foreign Office in the Nazi era. But the fact that you and three other historians were commissioned in 2005 by the then German foreign minister, Joschka Fischer, to come up with a comprehensive report on this topic seems to indicate that this is not true. Now that your book is out, the question remains, though, why such a detailed look at German diplomats' involvement in Nazi crimes comes so late.

Peter Hayes: As you indicated, the immediate occasion was Joschka Fischer's discovery that the Foreign Ministry's internal organizations continued to publish laudatory obituaries of individuals who had dubious pasts, and he wanted to put a stop to that. When there was an outcry against what he did, his response was to appoint a commission to look at the history of the Foreign Office and draw up a balance sheet of what actually had happened and had not happened and why an examination of what had happened had not been thorough in the postwar years. That's where we came in, and we've done that now.

Now that your research is finished, what revelations would you single out as having been completely new to you?

There were a number of things that were new to me. I was not aware of how consciously some people in the late 1940s set about building an alibi legend for the Foreign Office. The broad picture of the Nazi-era events that have attracted the most attention in the press, however, was already known to specialists, particularly the involvement of the Foreign Office in the Holocaust, and especially in dealing with allied states with whom Nazi Germany had to negotiate in order to obtain the Jews to deport. The involvement of German diplomats in that process was not so well known, especially not to the general public.

The head of the commission that compiled the study, German Professor Eckart Conze, told the media that he considered the Foreign Office at the time a criminal organization. Other scholars believe that's an exaggeration. What's your take on it?

In the past, researchers were quoted as having had enormous difficulties in trying to actually get hold of documents highlighting German diplomats' activities under the Nazis. How hard - or how easy - was it for you to obtain the material that you needed for the book?

One of the oddest features of the Foreign Office in Germany is that it has its own archives, and they are kept separate from the Federal Archives. As a result, you have people in charge of the archives who have a conflict of interest, if you will. They have double obligations. They are officials of the diplomatic service, and on the other hand they are archivists. This produces very difficult tensions. We had a couple of difficulties in obtaining certain records. We were not informed of the existence of some records. We had to find out about them and then ask directly for them. There were a few moments where it came to extremely vigorous conversations with the archive staff. But I think, although we cannot be 100 percent sure that we've seen everything, we're reasonably confident that we have the broad outline of the picture.

The study of the Foreign Office's crimes under Hitler shows that memories of the Nazi period are still dominated by myths. DW's Ramon Garcia-Ziemsen writes about how Germany's history was deliberately repressed. (29.10.2010)

Germany's Foreign Ministry was far more involved in the murder of millions of Jews than previously thought, according to a government study. The findings contradict claims that the ministry disapproved of the Nazis. (24.10.2010)

A study of the German Foreign Ministry's activities during the Nazi era reveals that it was far more deeply involved in the crimes of the Holocaust than previously thought. (25.10.2010)

Tensions have flared between Belarus and Poland again, this time over the destruction of a cemetery for Polish soldiers in the Belarusian village of Mikulishki. DW spoke with historians about the site's significance.