Ruins from a huge vacation resort complex built by the Nazis on the Baltic island of Rügen have been bought by an anonymous bidder at an auction but historical protection laws may prevent it ever being used. 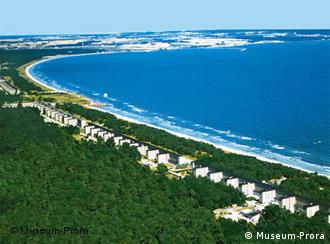 The buildings stretch for miles along the Baltic coast

The series of concrete-block lodgings, built in the 1930s to accommodate some 20,000 people under the Nazis Kraft Durch Freude (Strength Through Joy) leisure program, run 4.5 kilometers (2.8 miles) along one of Germany's most beautiful sandy beaches in the town of Prora. The federal government had been trying to unload the structure, known as the Colossus of the Baltic and classified as a historical monument, since 1992.

The crumbling section on the auction block Thursday, part of the overall complex, was offered at a minimum price of €125,000 (€154,000 ) and finally sold for €625,000 to a telephone bidder. A representative of the buyer who attended the auction in the northern city of Rostock left quickly and dodged reporters' questions. 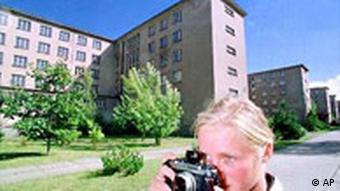 Prora is now one of Rügen's tourist destinations

The building is, alongside the Nazis' Nuremberg party rally grounds, the most imposing architectural relic of the Third Reich. But because of its size and disrepair, it had been a hard sell in the post-reunification years.

It was not immediately clear what the buyer would be able to do with the white elephant, which is protected by rigid environmental and historical regulations.

Raymund Karg, head of the federal property office in Rostock, said he was relieved by the sale.

"We did not think that we would reach the asking price," he said, with an eye on the restrictions on development of such a prime slice of real estate.

Kai Rocholl, director of the Norddeutsche Grundstücksauktionen auction house, said the organizers had received requests for information from around the world and firm offers from buyers in Switzerland and Greece.

Construction on Prora began in 1936 in a pioneering attempt at mass tourism, coupled with a desire to build loyalty and devotion to the Nazi party among the working class. Some 9,000 workers toiled on the eight 550-meter-long dormitory-style blocks in a complex that was to include a cinema, a theater, a banquet hall for 25,000 spectators and two swimming pools.

But the start of World War II stopped the development and the lodgings were finally used for German war refugees fleeing the bombing of their cities and, later, the advancing Red Army. The Soviet forces eventually occupied Prora and set up camp, followed by the East German army.

After reunification in 1990 and the departure of the soldiers, various tenants moved into the five blocks that had been completed: a youth hostel, a nightclub, museums and a documentation center on the history of the storied resort.

Failing to find a buyer for the whole complex, the state has been forced to try to sell it piece by piece and hopes to cast off the last blocks next year.

But Jürgen Rostock of the Prora documentation center said it was unfortunate that the unity of the giant building, which he said symbolized "the megalomania and the fall" of the Third Reich, could not be preserved.

Meanwhile another Nazi-era albatross, the former liquid oxygen plant at Peenemünde on the Baltic island of Usedom where the fuel for Hitler's lethal V2 rockets was produced, failed to find a buyer on Thursday. The Peenemünde complex was largely destroyed by Allied bombings in 1943, apart from a few buildings still standing.

Thousands German youths descended on the Baltic island of Rügen this weekend for the Prora03 festival. Despite the location's controversial past, organizers hope the event will raise the spirits of the depressed region.(August 28, 2003)