Images of catastrophes bombard us every day, but an exhibition at Hamburg's Kunsthalle shows how such depictions are nothing new. "Nature Unleashed" also reveals how shocking natural disasters were once seen as positive.

Hamburg's Kunsthalle new exhibition, Nature Unleashed: The Image of Catastrophe since 1600, is dedicated to artwork that has visually grappled with the topic of catastrophes ever since the early 17th century. Contemporary works are also part of the show.

But why has man always taken pleasure from pictures that show misfortune, tragedy and suffering? Why is it that natural disasters so entirely captivate an onlooker?

"Representations of catastrophes emotionally involve the viewer, making him or her become emotional and stirring feelings of compassion," explains Markus Bertsch, curator of the exhibition in Hamburg.

"Each person maintains a certain basic interest in catastrophes. They have a sort of magnetic effect. But after a specific point, the moral principles come into play," Bertsch says. The curator adds that that's the reason why most people first look at news, photos or videos of catastrophes, even if they actually don't want to, before they decide to turn away from the topic. 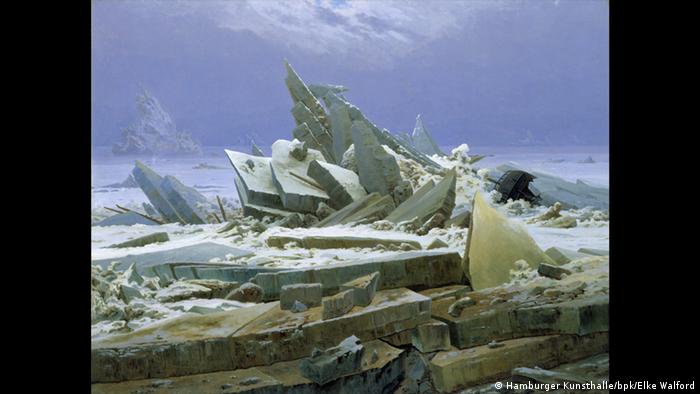 A common motif over centuries

Though the exhibition at Hamburg's Kunsthalle includes 15 to 20 works of contemporary art, most of the over 200 items on display come from earlier centuries.

Bertsch and his colleague Jörg Trempler, a professor from the University of Passau who helped develop and prepare the exhibition, wanted to make the viewer sensitive to the fact that catastrophes are not just omnipresent today due to the media, but have actually fascinated people for centuries.

In works dating back to the year 1600, different artists show how natural disasters have long played a central role in art; it's simply that the representation and transmission have changed and developed as time has gone on.

"This topic has been present and totally relevant for hundreds of years and comes to the forefront again and again," Bertsch points out.

While earlier artists depicted mythical catastrophes, since the 18th century, artists have increasingly drawn inspiration from current events, for example, the great fire of Hamburg in 1842, or the sinking of the Titanic on April 14, 1912. The second half of the 18th century can therefore be seen as the era when catastrophe depictions as a genre was truly born, according to Bertsch. 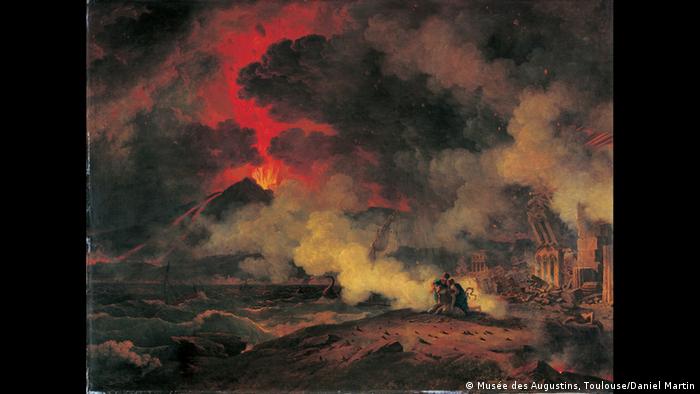 The Mount Vesuvius erupting, a painting from 1813

Nevertheless, general representations of different types of natural disasters, such as earthquakes, sinking wreaks, fires, and volcanic explosions, have been present throughout all eras.

The same is true for art of the present, Bertsch says, in that there is no focus on a particular type of catastrophe; the whole spectrum of disasters can be artistic subject matter today, just as it has been in the past.

The term catastrophe originally comes from the theater, where it was primarily characterized through its role as a turning point, causing a surprising change in plot. "This theatrical definition can be partially applied to art as well," Bertsch explains.

Consequentially, catastrophes were accompanied by a certain positive connotations such as productivity, especially at the beginning of the 17th century.

But in the centuries that followed, the suffering, misfortune and tragedy caused by catastrophes took center stage and have held the position to this day.

Nature Unleashed: The Image of Catastrophe since 1600 opens on June 29 at Hamburg's Kunsthalle and runs through October 14.

Diplomats and environmentalists are fighting to save the world at climate talks in Bonn, but cinema has already had a head start. In the movie world, mankind has long been fighting for survival in a destroyed world. (14.11.2017)

Volcanic eruptions and roiling seas: natural disasters and catastrophes hold a special fascination for mankind. Hamburg's Kunsthalle has some 200 exhibits from paintings to videos on display that span the centuries. (29.06.2018)