Natural Phenomenon: The making of a snowflake | Environment | All topics from climate change to conservation | DW | 12.12.2017

Natural Phenomenon: The making of a snowflake

Each and every snowflake floating down from the sky is different. Or, at least it's very unlikely that two of them are the same. How is that possible? Let's have a look at how snowflakes are created. 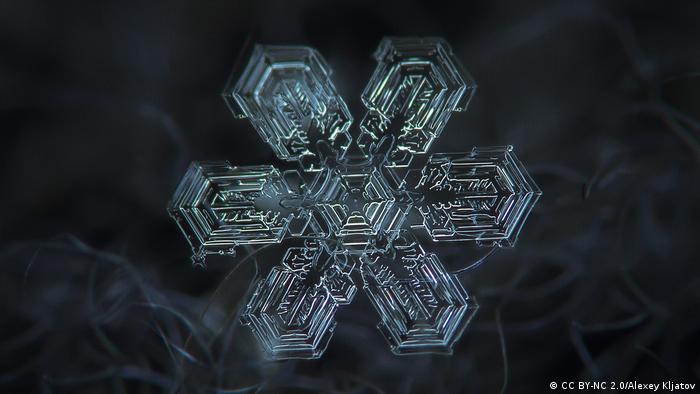 Winter is coming to Berlin: At least for a few hours last night, the city was covered in fluffy cold white snow. As you can imagine, the social networks overflowed with pictures of a peaceful looking environment. People just love it when snow appears.


In the morning, most of the snow was gone but the brief white coat that had covered the city made us think. What exactly is snow and why do snowflakes come in so many different geometrical shapes?

Just take these stunning macro photos of snowflakes as an example. The photographer, Alexey Kljatov, has taken pictures like these for many years now and he's not alone. Ask google and you will find that many people spend their dreary dark winter days on similar pursuits. In a blog post, Kljatov wrote that he really likes what he does: "[...]seeing thousands of snowflakes in all their details, i do not get tired to admire new crystals with amazing form or an incredible inner pattern [sic]."

Usually, he writes, he will "capture every snowflake as a short series of identical photos, usually 8-10." He takes the best of all photos to get a crisp and detailed result.

This is how it works

In general, every snow crystal begins as a tiny hexagonal plate. The symmetry originates simply from the the structure of frozen water. When the tiny base crystal sticks out into the humid air, its corners grow into different shapes, some are more common than others. Here's a gallery, although it's almost impossible to find two identical snowflakes:

In addition to this, bullet shaped snowflakes can be found. There are imperfect examples too. Like humans, no snowflake is actually perfect. They may have grown unevenly, broken, melted and refrozen, or have come in contact with other crystals. And, finally, so called rimed crystals happen. The result is called 'graupel'.

According to different calculations, there are up to 80 distinct snow crystal types.


The way a snowflake grows depends on the surrounding temperature and humidity. If all of its branches are exposed to the same conditions at the same time, they grow synchronous and produce a clear and roughly symmetrical snow crystal.

It's very unlikely that two identical snowflakes appear but it's not impossible: Both of the crystals would have to fall on the very same path through the clouds, and under the same conditions.