NATO to take charge of Libyan operations ′within days′ | World | Breaking news and perspectives from around the globe | DW | 25.03.2011

NATO to take charge of Libyan operations 'within days'

After haggling for days over NATO's role in the air campaign, the alliance has finally decided that it will run the no-fly zone over Libya. Britain said it hopes that NATO will soon take over the entire operation. 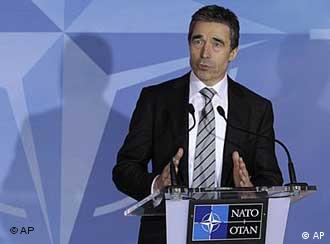 Britain expects NATO to take full command of Libyan operations within days despite a failure so far to reach final agreement on this, Foreign Secretary William Hague said Friday.

"I have every expectation there will be a NATO command of the entire operation, not just of the no-fly zone and the arms embargo, so we are making very good progress on agreeing these things now among the NATO nations," Hague said.

France and Britain also said they will present a plan for a diplomatic solution on Libya before next week's international conference on the crisis in the North African country, French President Nicolas Sarkozy said Friday.

"Before that summit in London, [British Prime Minister David] Cameron and I will present a common plan. It will be a Franco-British initiative to show that the solution cannot be a military one, it has to be a political and diplomatic solution," Sarkozy said.

Sarkozy said he wanted to "involve Germany" in the initiative. Berlin has opposed any military engagement against Libya, breaking ranks with Britain and France over a United Nations Security Council resolution that, among other things, authorized a no-fly zone.

Germany abstained in the UN vote last week, while its Western allies voted in favor.

NATO had announced late on Thursday that it would take over enforcement of a United Nations-mandated no-fly zone over Libya, but hadn't agreed upon whether the alliance would take full control of military operations there.

"We have taken on the responsibility for the no-fly zone, while the coalition still continues its activities," NATO Secretary-General Anders Fogh Rasmussen said Thursday.

"This means right at this moment you will have two operations," he added, indicating that discussions would continue on putting NATO in charge of both operations, "but that decision has not been made yet."

The decision came after marathon talks focused on Turkey's objections to the coalition's bombing campaign. NATO is expected to launch operations within the next three days to prevent Libyan leader Moammar Gadhafi's jets from taking to the skies - shooting them down if necessary - while the coalition remains in charge of targeting ground forces.

Control of air space only 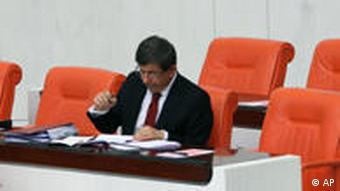 The compromise that saw NATO take responsibility for the no-fly zone resulted from Turkey's insistence that NATO should strictly limit itself to policing the zone, refraining from more aggressive actions such as the bombing earlier this week of a Gadhafi compound.

NATO's current agreement to take command of the no-fly zone doesn't allow the US to make as quick an exit from the military operation as the Obama administration had hoped.

American sea and air power remain key parts of the effort to keep forces loyal to Gadhafi from attacking civilians. The US along with France and Britain, maintains primary responsibility for attacks on Gadhafi's ground forces and air defense systems, the toughest and most controversial parts of the operation.

Meanwhile, loud explosions were heard in southern parts of Tripoli on Friday as airstrikes by coalition forces imposing the no-fly zone continued. 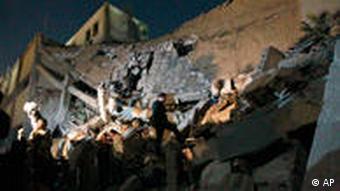 Also Friday, the United Arab Emirates announced it would send 12 planes to take part in operations to enforce the no-fly zone, the state news agency said.

"The UAE air force has committed six F-16 and six Mirage aircraft to participate in the patrols that will enforce the no-fly zone now established over Libya. UAE participation in the patrols will commence in the coming days," said UAE Foreign Minister Sheikh Abdullah bin Zayed al-Nahayan.

The move was greeted by US, Britain and France, as it increases the Arab role in the military operation against Libya. The UAE is the second Arab country after Qatar to send planes to aid in the fight against Gadhafi's regime.

That will bring the number of countries taking part in the coalition to 12, the Pentagon said.

DW-WORLD offers full multimedia coverage of the fighting and political upheaval in Libya. What events led up to a debate over a no-fly zone - and what do they means for the oil-producing nation and the world? (24.03.2011)

As the UN-backed coalition seizes control of Libyan airspace, Washington maintains that Gadhafi must leave power. But past no-fly zones in Bosnia and Iraq suggest that air campaigns have a limited impact on the ground. (23.03.2011)

With the UN-mandated air campaign continuing to pound military sites from the skies and emboldened Libyan rebels taking on his forces on the ground, Moammar Gadhafi is now facing a legal challenge to his 40-year reign. (25.03.2011)