NATO to send AWACS planes to Afghanistan | World | Breaking news and perspectives from around the globe | DW | 12.06.2009 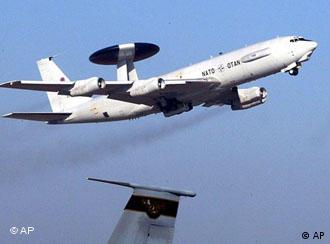 AWACS planes and 100 German crew are to head for Afghanistan

The move comes after France removed its objections to the deployment. The total annual cost is estimated at 150 million euros. Germany has agreed to carry 16 percent of the cost.

“We can provide an additional contribution to air security in Afghanistan with these NATO AWACS planes,” German Defence Minister Franz Josef Jung (CDU) said, adding that, as air traffic increases in the country, “it is important that we are engaged in this aspect.”

Because German military personnel are to be involved, the deployment of the AWACS planes will have to be approved by the lower house of the German parliament. Chancellor Angela Merkel's Christian Democratic Union and the Social Democratic Party that make up the grand-coalition government, have a large majority in the Bundestag. However, the issue is not without controversy. The senior member of the Left party on the Bundestag's defence committee, Paul Schaefer, has criticised the decision, saying he doubted that the planes would be used strictly for civil aviation purposes.

Meanwhile, in Brussels, NATO defense ministers gave a green light to a US plan to streamline the way the battle against the Taliban and al-Qaeda is fought in Afghanistan, an alliance spokesman said on Friday.

Attacks soared 59 percent from January through May from the first five months of 2008, according to a report by NATO's International Security Assistance Force (ISAF).

All told, insurgent violence climbed 33 percent in 2008, they said.

ISAF statistics show the number of insurgent attacks in May surpassing the 1,400-mark for only the second time since January 2007. Monthly attacks first topped 1,400 in August 2008, according to the report, which includes data of attacks on US and NATO forces as well as Afghan military, police, government and civilian targets.

"The past week was the highest level of security incidents in Afghanistan's post-liberation history," General David Petraeus said in a speech in Kabul, referring to the Taliban's ouster from power in late 2001.

"There is no question that the situation has deteriorated over the course of the past two years and that there are difficult times ahead," said Petraeus, who heads the US Central Command.

A mild winter, which enabled Taliban and other insurgents to cross freely into Afghanistan from safe havens in Pakistan, and heightened NATO and Afghan military operations, which increased by about one-third from January through May, were factors in the increase of attacks, the ISAF report said. 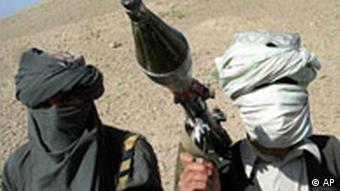 The Taliban insurgency has gathered speed this year

South Afghanistan, where most US troops are concentrated, saw a 78 percent jump in attacks from January through May while eastern Afghanistan, which lies across the border from militant safe havens in Pakistan's Federally Administered Tribal Areas saw a rise of 41 percent.

Western Afghanistan, where the US military has been embroiled in a controversy over civilian deaths, saw a 73 percent increase in insurgent attacks.

The insurgents' form of attack also changed in the first five months of 2009, with a 61 percent increase in direct-fire attacks. However, attacks employing roadside bombs known as improvised explosive devices, a favored tactic of the insurgents, also rose 64 percent.

"There are some tough months ahead," Petraeus added, saying that the levels of violence would rise in part "because we are going to go after their sanctuaries and safe havens as we must." 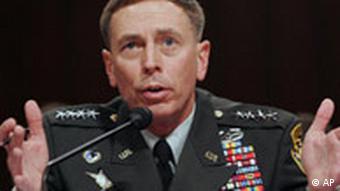 Petraeus, whose strategic thinking is widely credited with rescuing Iraq from the brink of open civil war in 2007, is overseeing the military segment of President Barack Obama's Afghanistan strategy.

Obama's strategy is seen by some observers as risky as his administration pours thousands of fresh troops into Afghanistan as part of a larger plan to thwart Taliban influence and stabilize the war-torn nation.

The United States has already increased its military presence in Afghanistan to 56,000 troops, from about 32,000 in late 2008, and Petraeus said he expects to see a total 68,000 troops in the war zone by autumn. There are an additional 33,000 allied troops under US and NATO commands.

Analysts have warned the counterinsurgency strategy could lead to sharply higher US casualty rates, potentially diminishing support for the war at home as members of Congress head into mid-term elections in 2010.

Petraeus also warned that the Afghan security forces – planned to reach 232,000 by 2012 - may not be large enough.

Afghan Foreign Minister Rangin Dadfar Spanta expressed the same doubts earlier in the week, saying that he would like the number of Afghan soldiers and police to reach 400,000, compared to the current force of 160,000.

NATO command structure to be streamlined

"There is an agreement in principle to this command structure but the details will have to now be worked out," spokesman James Appathurai told reporters at NATO headquarters.

US Defense Secretary Robert Gates had clarified parts of the plan to centralize control over combat operations, Afghan military and police training, and civilian reconstruction during the talks on Thursday evening. 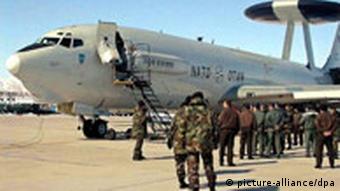 Germany's latest contribution comes in the form of AWACS

The command structure will be overseen by the new head of the International Security Assistance Force (ISAF) commander in Afghanistan, US Lieutenant General Stanley McChrystal, who was expected to speak to the ministers Friday.

McChrystal's deputy US Lieutenant General David Rodriguez would coordinate the fight against the insurgents which would include combining a civilian surge with a flood of troops into the southern strongholds of the Taliban and its backers.

The move would see control of combat operations in the five zones – four at each point of the compass and one in Kabul – centralized in the Afghan capital to ensure that forces from more than 40 nations are pulling in the same direction.

On the reconstruction side, efforts have proved unbalanced and disjointed, with international civilian-military rebuilding teams often working out of synch or, worse, at cross purposes with the Afghan government.

Meanwhile if foreign troops are ever to leave the country, training of the Afghan army and police must be stepped up, with NATO set to join US training efforts there.

An influential survey finds that Germans support NATO, and hold France and especially new US President Barack Obama in high esteem. But they’re still skeptical on keeping troops in Afghanistan. (03.04.2009)

US calls for NATO allies to send more forces to Afghanistan have met with a weak response. Germany is against Washington's plans to provide security during the coming elections with the alliance's rapid response force. (19.02.2009)

US Calls for More Troops in Afghanistan

The US has called on fellow NATO members to allow the alliance to attack the flourishing opium trade in Afghanistan in an effort to weaken the Taliban. (09.10.2008)