NATO to move warships closer to Libya, resists military action | World| Breaking news and perspectives from around the globe | DW | 10.03.2011

NATO has taken a cautious approach to action in Libya, opting for increased coastal monitoring rather than a no-fly zone. But France has taken a lead, recognizing rebel leaders as Libya's legitimate government. 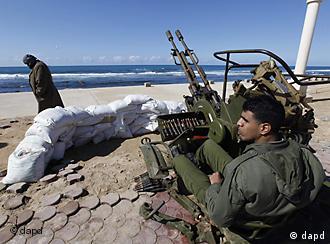 The warships are to increase monitoring of the violence

The violence in Libya dominated a meeting of NATO defense ministers in Brussels on Thursday, as the military alliance agreed to move its warships to the central Mediterranean to monitor the situation.

The warships will "improve NATO's situational awareness, which is vital in the current circumstances, and they will contribute to our surveillance and monitoring capability," Secretary-General Anders Fogh Rasmussen told reporters after the meeting. 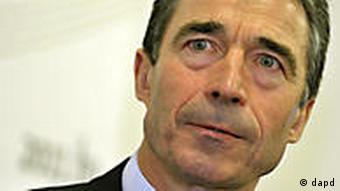 Rasmussen said more planning was needed for a no-fly zone

Rasmussen backed away from the possibility of using military force, saying such action would require a strong legal basis and support from regional partners. He added that the alliance was not yet prepared to institute a no-fly zone.

"We considered ... initial options regarding a possible no-fly zone in case NATO were to receive a clear UN mandate," he said. "Ministers agreed that further planning will be required."

Meanwhile France became the first country to formally reject the government in Tripoli and recognize the Libyan National Council, a group of rebel leaders based in the east of the country which aims to present a political face to the opposition.

France has also led the push for a no-fly zone, co-drafting a resolution with the United Kingdom that was to be presented to the UN Security Council.

Politicians and analysts framed France's aggressive push as an attempt to redeem itself for being slow to respond to the uprising in its former colony Tunisia, which ousted President Zine El Abidine Ben Ali in mid-January.

"From the start we've been absent from this extraordinarily positive movement in North Africa," said Dominique Paille, a member of President Nicolas Sarkozy's ruling UMP party. "We started very badly ... and since then we have been a little afraid. We must take a certain leadership again."

Germany said Thursday it had frozen accounts belonging to the central bank and the sovereign wealth fund. More than 100 accounts at 14 German banks were targeted, blocking billions in funds, according to government sources.

The European Union also planned to reallocate an aid package worth 4 billion euros ($5.7 billion) designed to support the growth of democracy and boost business across the region.

On the ground, street-to-street fighting has turned the center of Zawiyah into a "ghost town" where rebels are tensed for the next assault by forces loyal to leader Moammar Gadhafi, who have cut off supplies to the western Libyan city.

The British daily The Guardian said one of its correspondents had disappeared in the city. The press freedom group Reporters Without Borders said the man had been arrested along with a Brazilian colleague.

Pro-Gadhafi troops were said to have launched a major offensive on rebels in the eastern oil town of Ras Lanuf, forcing them to retreat.

A hospital source said at least four people had been killed and 35 wounded. Hundreds of rebel fighters were said to be fleeing further eastwards after coming under intense mortar and rocket fire.

While Colonel Moammar Gadhafi continues to hang onto power in Libya, the United Nations and the European Union hope to choke him into submission through sanctions. But Gadhafi still has income sources in Germany. (10.03.2011)

Readers add their voices to debate on Libya

Should a no-fly zone be created? Or should the international community render aid? Or simply look the other way? Our readers wrote in with their opinions. (09.03.2011)