NATO defense ministers have agreed to train Kosovo's army. But Turkey blocked a deal that would see the alliance working with the EU in the former Serbian province. The fate of international efforts there is uncertain. 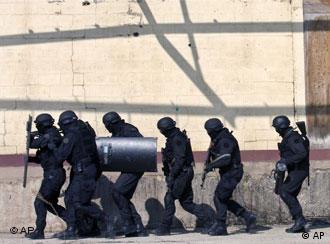 "We have agreed today to implement NATO's new tasks in Kosovo. With this decision NATO will be able to assist Kosovo in building the necessary democratic security institutions," NATO Secretary General Jaap de Hoop Scheffer said at the meeting in Brussels on Thursday, June 12.

But the alliance failed to agree on a change to its current operational plan which would have allowed NATO peacekeepers in Kosovo to work directly with an EU law-enforcement mission, after Turkey blocked the change over a dispute with Cyprus, NATO sources said.

Under a complex compromise proposed by UN Secretary General Ban Ki-Moon on Thursday morning, NATO's 15,700-strong KFOR peacekeeping force is meant to guarantee security in Kosovo once the newborn country's constitution comes into force on Sunday.

An EU mission, EULEX, is meant to provide civilian law and order from the same date, taking over from the UN mission which has performed that function hitherto.

KFOR and EULEX are therefore expected to work together as the military and civilian arms of security in the new country.

The move makes it unclear how the KFOR-EULEX relationship can now function on an official level. 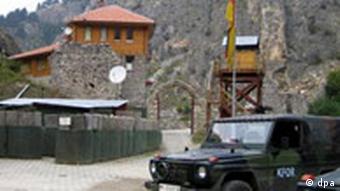 NATO, the UN and the EU will have to coordinate their missions somehow

Despite the row, however, NATO members agreed to expand KFOR's mission to include training Kosovo's new army, the lightly-armed Kosovo Security Force (KSF), and to oversee the disbanding of its predecessor, the Kosovo Defense Force (KDF).

"In the future, we, as KFOR, will undertake the dismantling of the KDF and the formation of the KSF. That means that we are making our contribution to stability in the region," German Defense Minister Franz Josef Jung said.

Spain to stay in Kosovo force

The agreement came despite the fact that NATO members Spain, Slovakia and Romania have not recognized Kosovo's independence and therefore refuse to take part in training its armed forces.

On Thursday morning, Spain agreed to approve the training mission as long as it was not expected to take part. NATO allies also agreed to set up a special fund for the mission, rather than funding it from the alliance's common budget, diplomats said.

Spain confirmed that it would maintain its current 636 soldiers in KFOR. Slovakia and Romania said that they would decide on the training mission later.

Kosovo has been under UN-led administration since NATO bombers ended ethnic fighting in 1999. The UN has provided civilian order in the province, while KFOR has provided security.

Under a plan presented by UN special envoy Martti Ahtisaari in 2007, Kosovo was meant to declare independence with Serbia's consent, and the UN was meant to hand over its civilian law-enforcement role to the Kosovo authorities under the supervision of EULEX.

Serbia rejected the proposal, but the EU nevertheless ordered EULEX to deploy in mid-February, in the expectation that the UN would hand over when Kosovo's constitution came into force on June 15.

Russia's opposition in the UN Security Council stalled that handover. As a result, only some 300 of EULEX's planned 1,800 international staff have yet deployed, and their legal status in the country is challenged by its Serb minority, Belgrade and Moscow.

On Thursday morning, Ban proposed a way out of the deadlock by "reconfiguring" UNMIK and allowing EULEX to take over many of its functions "under the UN umbrella."

Germany's parliament will decide on Thursday, June 5, whether to keep its soldiers in Kosovo for another year. The peacekeeping mission is seen as crucial to maintaining order in the former Serbian province. (05.06.2008)

Pro-Western forces in Serbia claimed victory on Monday after general elections gave them a mandate to strengthen ties with the European Union. (12.05.2008)

Former German Chancellor Gerhard Schroeder said in an interview that Kosovo's unilateral declaration of independence was a mistake as was the EU's recognition of it. (06.05.2008)