They're opposed to the EU, but plan to work together in the campaign for the European election in May 2014. Marine Le Pen and Geert Wilders have met in the Hague to set up their alliance. 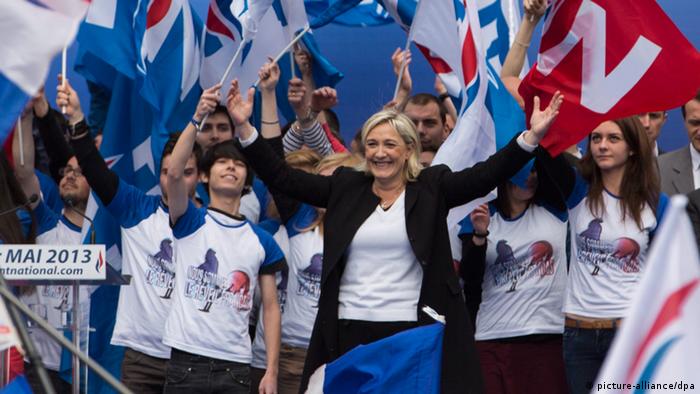 They're both blond, politically successful and often described as charismatic - and they're both opposed to the European Union. And yet Marine Le Pen and Geert Wilders are firmly committed to standing together in the European elections in May 2014. Le Pen traveled to the Hague at Wilders' invitation on Wednesday (13.11.2013) to forge their anti-European alliance.

They have enough in common to do so, says Sylvie Goulard, a liberal member of the European Parliament from Marseilles. They're both against uncontrolled immigration and European integration, they both like to stoke fears of an all-powerful Brussels bureaucracy, and they both say they listen to the voice of the people.

"Unfortunately, that's enough common ground," says Goulard. "But if every European country raises its national interest above all the others, that will destroy Europe." 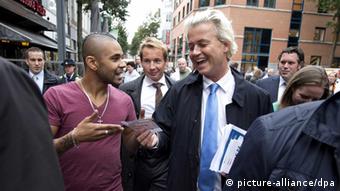 Wilders has found plenty of support for his far-right views

But it will be very difficult to organize Europe-wide cooperation between the far-right parties, according to Kai Arzheimer of Mainz University. "We've had similar parliamentary groups in the past in the European Parliament, and they've always fallen apart within two or three years. There was too much rivalry, and in particular a lack of professionalism."

Those projects also failed, says Arzheimer, because the parties could not convince their voters why nationalists had to cooperate on a European level.

In one French opinion poll on the European elections, Front National leader Marine Le Pen came top. Wilders is also gathering momentum in the Netherlands with his Party for Freedom. Both of them are typical of a new generation of right-wing politicians who think beyond their own borders - and appear more moderate than their predecessors.

"Marine Le Pen's tone is very moderate compared to that of her father," says Goulard. Her father, Jean-Marie Le Pen, was the founder of the Front National and known for his provocative positions.

But Goulard believes that, on the content level, the party is still putting out the same old poison and remains a home for many people who have highly racist opinions. For example, their program includes preferential treatment for French citizens in the country, even though that's against EU law and current human rights conventions. 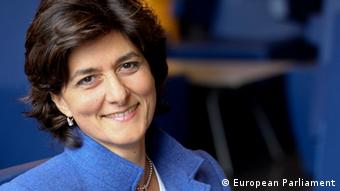 Sylvie Goulard believes that the EU is itself partly to blame

Arzheimer points out that today's nationalist right says it's committed to freedom and democracy, behaves almost like liberals, and even stands up for the rights of women and homosexuals. The common enemy is the specter of European integration. And that, to a certain extent, has made the parties respectable.

Indeed, as Arzheimer says, the parties are not openly racist: "Nowadays it's about conflict over cultural values, and this more modern form of racism is much more acceptable in society."

The xenophobia that still exists is now no longer directed against other Western Europeans. The parties are much more inclined towards an alliance of national states in order to protect each nationality and each national identity.

"The alliance is supposed to protect liberal values against people from other cultures," says Arzheimer.

Boosted by skepticism about the EU

Goulard says that the widespread criticism of Brussels' policies since the beginning of Europe's economic and financial crisis has only strengthened anti-European populist right-wing parties: "It's not surprising that people are looking for a scapegoat at a time like this," she says. "After all, the EU has not always carried out the right policies."

In France too, the politicians have often seemed helpless in the crisis and have failed to implement important reforms. "President Hollande has not been very successful so far," says Goulard. "And unfortunately Ms Le Pen seems like an alternative, not least because she's never been in power before."

There are right-wing populist parties in many other EU countries as well. But more extreme parties such as Germany's National Democratic Party, the British National Front, Jobbik in Hungary and Aatak in Bulgaria are also gaining ground. They all have one thing in common: they promise easy solutions for very complex problems - not just within their own countries but for the whole of Europe.

For Norwegians, Progress Party not far-right

For the first time, the populist Progress Party is part of Norway's coalition government. Foreign observers are wary of the party, seeing connections with the far right - a concern Norwegians don't necessarily share. (11.11.2013)