Nasdaq Might Shut Down German Exchange | Business| Economy and finance news from a German perspective | DW | 11.08.2003

U.S. stock exchange Nasdaq opened a German bourse amid much fanfare only four months ago. But as the outlook for equities remains bleak, Nasdaq appears prepared to pull the plug on the new exchange before year’s end. 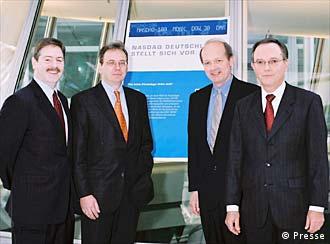 The power players behind Nasdaq Deutschland had high hopes when it was lauched in March.

In March, America’s top high-tech stock exchange Nasdaq joined forces with the regional Berlin and Bremen bourses as well as leading German banks Dresdner Bank and Commerzbank to form what was intended to be a challenge to Deutsche Boerse’s dominance of the German equity market.

But according to numerous media reports, the ongoing tough market conditions and less-than-expected turnover for the new exchange have made it clear to Nasdaq that there is little future for it in Germany.

“Everybody in Frankfurt is aware that the end is near for Nasdaq Deutschland,” one investor in the project told Die Welt newspaper. Nasdaq Deutschland has refused to comment on the speculation over its coming demise, but some observers believe a final decision to close the exchange could come as early as Monday.

When founded this spring, Nasdaq Deutschland had hoped to garner a market share of 15 percent by 2006. That would enable it to become a respectable number two in Germany after the mighty Frankfurt-based Deutsche Boerse. Since currently around 90 percent of all German equity business is done in Frankfurt, the Nasdaq exchange was seen as the best possible way to secure the future of the regional bourses in Berlin and Bremen.

Now only months later, Nasdaq is apparently beating a hasty retreat back to American shores and the German exchange project is being left high and dry. But not without good reason: Nasdaq Deutschland managed a trading volume of only €148 million ($167 million) for the entire month of June – an amount a single mid-sized stock on the Frankfurt Stock Exchange easily manages in one day.

The dire situation of the German exchange has been know for some time. In July, John Hilley, head of Nasdaq International and on Nasdaq Deutschland’s supervisory board, was forced to resign.

The likely decision to quit Germany also comes after Nasdaq announced in June it would shut down it’s Nasdaq Europe exchange headquartered in Brussels by November. The exchange’s operations in Tokyo have also been mothballed. But as Nasdaq chooses to focus on its U.S. business, the German investors in the project could be left without a new partner to take the Americans’ place.

Although the group had reportedly been in talks with European rival Euronext to buyout Nasdaq’s 50 percent stake, few seem to think that went very far. “You don’t hear much about that anymore so you can assume it didn’t get very far,” one Frankfurt insider said.

Although the financial losses incurred by shutting down the exchange would be modest, the debacle would be an embarrassing enough to damage the image of those German firms involved.

Financial experts at the German Stock Exchange are due to discuss the expansion of the equity market and the implementation of the new TecDAX technology sector index model at a meeting on Tuesday. (February 10, 2003)