US space agency NASA has launched an unmanned spacecraft to the moon to study the thin lunar atmosphere. Scientists hope the mission will help solve a number of mysteries. 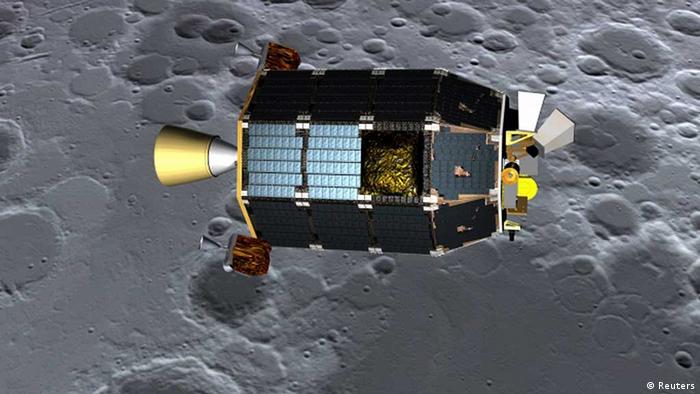 The spacecraft lifted off at 0327 GMT on Saturday from NASA's Wallops Flight Facility in the US state of Virginia aboard a Minotaur 5 rocket.

The flight to the moon will take about a month, as the spacecraft will first make three highly elliptical passes around the earth before being captured by the moon's gravity. Other missions to the moon have taken a matter of days or even hours to get there.

The Lunar Atmosphere and Dust Environment Explorer spacecraft, known as LADEE (artist's illustration above), is designed to look for dust rising from the lunar surface during its 100-day orbit around the moon.

The dust phenomenon was identified four decades ago by US astronauts walking on the moon as a huge problem for sensitive spacecraft and scientific equipment.

"For the first time in 40 years, we have the opportunity to address that mystery," project scientist Richard Elphic said during a launch broadcast on NASA TV.

As Curiosity patrols Mars looking for traces of life, it carries a German radiation gauge to measure the rays future astronauts will have to contend with on the planet. And it's not sending back good news for humans. (14.08.2013)

Among other things, scientists hope the mission will clarify whether a pre-sunrise glow on the lunar horizon seen by the astronauts was caused by lunar dust electrically charged by solar ultraviolet light.

LADEE will also examine the moon's tenuous atmosphere, made up of argon, helium, sodium, potassium and other elements, and possibly deliver clues about how water became trapped inside craters at the moon's frozen poles.

At the end of its mission, the $280-million (212.43-million-euro) spacecraft will plunge into the moon's surface.

The idea for the mission came as NASA was planning to return humans to the moon as part of the Constellation program. The program was cancelled in 2010 by US President Barack Obama for being too expensive.

US astronauts last walked on the moon in 1972. NASA now hopes to send humans to the planet Mars by the 2030s.