Myths and facts about diabetes | Science| In-depth reporting on science and technology | DW | 14.11.2017

Everyone knows diabetes. Those who suffer from it have to inject themselves with insulin every day and have strict dietary restrictions - right? Not quite. Time to clear up some prejudices with DW's fact check.

1. You get diabetes from eating too much sugar.

Not exactly. First off, it's important to distinguish between different types of diabetes. In people with type 1, the body doesn't produce enough insulin - a hormone that allows your body to use sugar - because of a genetic disorder. With type 2, the body can't process the insulin correctly. Type 2 is the "acquired form" of the illness, which roughly 90 percent of diabetics suffer from. The causes of type 2 include inertia and being overweight, a consequence of a diet too full of fats, carbohydrates and sugar. Type 1 diabetes, by comparison, is an autoimmune disease. Sugar is not a cause at all.

2. Only people who are overweight can get diabetes.

False. Yes, the risk of contracting type 2 diabetes is twice as high for overweight people compared to people with a "regular" weight - and even three times as high for severely overweight people. But in more than a quarter of overweight people, their metabolism remains healthy. That means that other risks play a role as well, like family disposition or age.

3. Diabetes is a "lifestyle disease."

False. Cases of diabetes are increasing the world over, and in relative terms, type 1 is gaining ground on type 2. The reasons for this spike are unclear. The International Diabetes Federation and WHO count roughly 400 million cases worldwide. Eighty percent of them are in developing countries and emerging economies. 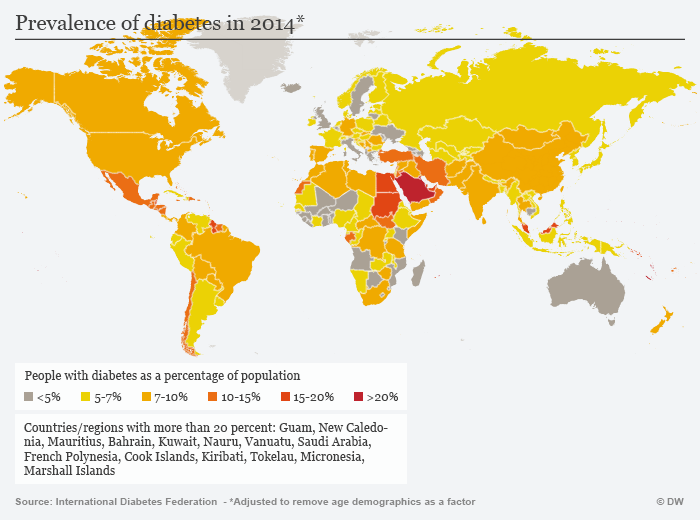 4. Only old people have diabetes.

False. Diabetes does occur among old people more often, but all age groups are affected. A 2014 study by the International Diabetes Federation determined that roughly half a million children have type 1 diabetes. Those who are afflicted by type 2 diabetes are getting younger and younger, too. The number of type 2 diabetes cases in children have multiplied by five over the last ten years.

5. Diabetics have to inject themselves with insulin every day

True and false. Type 1 diabetics must inject themselves with insulin, because their bodies can't produce insulin independently. For type 2 diabetics, this is not the case, at least not right after they're diagnosed. At first, the body can compensate for the insulin resistance by producing more of the hormone. The pancreas only slows down after many years, producing less and less insulin. At one point, insulin production can stop completely - and that's when type 2 diabetics need to inject themselves with insulin as well.

Half-right. People with diabetes type 1 have to rely on insulin for the rest of their lives. For type 2 diabetics, the situation is different. Being overweight and not moving enough can lead to diabetes. In turn, diabetics can basically hit pause on their illness by eating healthily and committing themselves to an active lifestyle. In this way, type 2 diabetes can be pushed back permanently or temporarily. It isn't possible to cure diabetes with medication or surgery.

WHO: Diabetes cases in adults quadrupled since 1980

Almost four times as many adults live with diabetes when compared to known figures from 1980. A global World Health Organization report noted sharp increases in cases in low- and middle-income countries. (06.04.2016)