Myanmar: Who is actor Paing Takhon, arrested by the military?

The military arrested Takhon, a celebrity who openly backed anti-coup protests, early on Thursday. His detention comes as part of a widening crackdown on media figures and artists in the country. 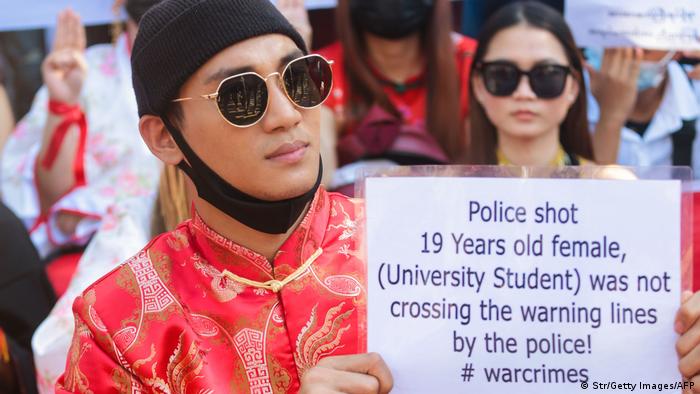 Actor and model Paing Takhon protests in Yangon in February

Paing Takhon, a Myanmar actor with millions of fans in Southeast Asia, has been arrested by the military, as part of a widening crackdown on media figures in the country.

The 24-year-old actor, who has openly backed Myanmar's anti-coup protests, was arrested on Thursday morning in his home in North Dagon district of Yangon.

Paing Takhon, a popular celebrity in both Myanmar and neighboring Thailand, has been active both at in-person rallies and on his social media pages. Both his Facebook page and Instagram account, which has more than a million followers, have also been taken down.

"As he's seriously ill, they arrested him calmly without violence. We do not know where he's taken," his sister Thi Thi Lwin posted on Facebook.

"He has been actively speaking out against the military coup since early February," Myanmar's Civil Disobedience Movement tweeted. "The junta is now arresting medics, engineers, students, workers, and finally actors. #WhatsHappeningInMyanmar"

"Free the artists!! Free Paing Takhon, Win Min Than, Ye Tike, Lu Min, Saw Phoe Khwar, Min Htin KoKo Gyi and Zarganar who used their platform to voice out for the truth. Please pray for their safety and speak out for them," actress May Toe Khine tweeted.

How did Paing Takhon get his start?

Paing Takhon started his entertainment career as a runway model in 2014, and shortly after started acting in TV commercials and music videos. He launched his first solo album in 2017, and that same year, took his first lead role in the film "Midnight Traveller."

Rise to fame in Thailand

In 2019, he also rose to fame in neighboring Thailand — an unusual development for a celebrity from Myanmar.

That year, he began appearing in advertisements and television shows in Thailand, and later took on the role of ASEAN Economic Community ambassador. He became so popular that in September 2019, he was appointed as Myanmar's tourism ambassador to Thailand by the Myanmar Tourism Federation.

Earlier this year, images of Takhon went viral, after he uploaded photos of himself with a shaved head and wearing burgundy monk's robes.

"It was really a hard decision for me to give up my hair as it was one of my influences on my fans," he told Coconuts Yangon in January. "Still, I wanted to make my mom happy since it was her dream for her son to be a monk in his lifetime."

The Myanmar military has published a list of 120 celebrities wanted for arrest, including several singers, actors and models. The stars are facing accusations of spreading dissent, and can face years in jail if convicted.