Myanmar police have clashed with students protesting against an education bill they say stifles academic independence. Several demonstrators have been beaten by baton-wielding police or detained. 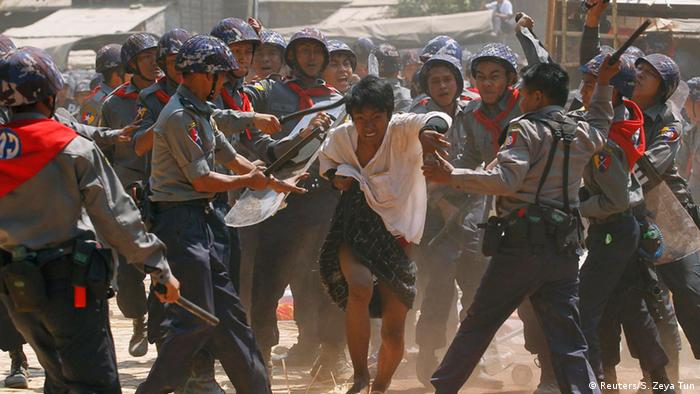 Police in the central town of Letpadan attempted to disperse the group of about 200 protesters on Monday following a standoff with security forces for more than a week.

The students have been rallying sporadically since November 2014 against an education law. They are demanding changes to legislation to decentralize the school system, to teach in ethnic languages, and to allow the formation of student unions.

A group of young activists set out on foot from the central city of Mandalay more than a month ago in a symbolic protest.

Myanmar police initially said they would allow the students and monks to continue their march on Tuesday. After the agreement fell apart, however, authorities blockaded their route with vehicles and barriers made of wood and barbed wire.

One witness told Reuters news agency that police had chased the students and monks into a Buddhist monastery where they had taken refuge.

The clash between protesters and police came just days after Myanmar authorities violently cracked down on a supporting rally in the main city of Yangon on Thursday where eight activists were briefly held.

Yangon has played host to several student-led uprisings in recent decades, including the 1988 demonstrations which that sparked a bloody military assault under the former junta.

A semi-civilian reformist government took power in 2011 after 49 years of military rule. Observers now fear, however, that democratic reforms are stalling in the run-up to a breakthrough general election, expected to be held at the end of this year.

President Thein Sein has declared a state of emergency in Myanmar's eastern region of Kokang. A three-month period of martial law has also been imposed there after fighting broke out between ethnic minority rebels. (17.02.2015)