German author Jan-Philipp Sendker has made an appeal to soldiers to disobey orders in Myanmar. His Facebook post has been shared nearly a thousand times. 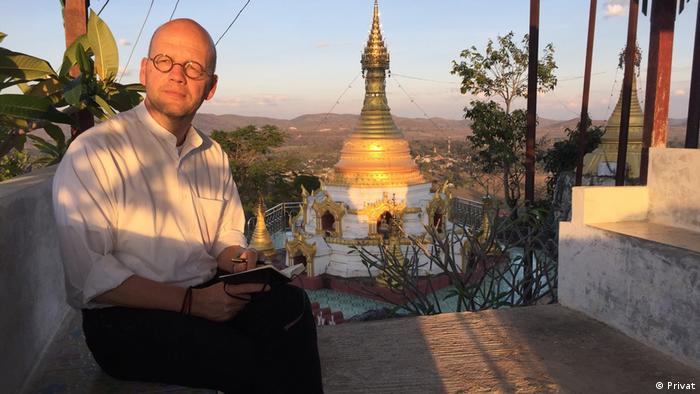 Writer Jan-Philipp Sendke has spent a lot of time in Myanmar and wrote a series of novels about the country.

German journalist and author has daily contact with his friends and colleagues in Myanmar. "Some tell me that they are afraid of being fetched. They are virtually sitting on their packed suitcases," the writer said in a talk with DW. They are afraid of being arrested at night. After all, journalists and authors critical of the regime have already been taken from their homes.

That's a terrible feeling, says Sendker, thinking about his publisher and translator. His series of novels in German about Myanmar — a family saga that has sold millions of copies — was also translated into Burmese, the official language of Myanmar, and became a bestseller there. The 61-year-old has traveled to the country countless times, first in 1995 as a journalist, and later up to three times a year as a novelist. Like the local people, he was initially shocked by what was now the third military coup in the country's history. He follows the mass protests daily, feeling both stunned and touched. "The resistance is so broad and imaginative," Sendker reflects.

'Not all bloodthirsty monsters'

Still, he remains very concerned, especially given that the military forces ramped up their use of deadly force and mass arrests were conducted over the weekend. And meanwhile, police in Yangon, Myanmar's biggest city, used tear gas against protesters on Tuesday, March 2.

The United Nations also said it believed that at least 18 people in several cities were killed on Sunday, when security forces opened fire to disperse demonstrators.

The junta has already shown what it was capable of in the past, in the bloody suppression of protests in both 1988 and 2007. Still, says Sendker, "I've met soldiers time and again on my travels.  They're not all bloodthirsty monsters."

Feeling rather helpless some 8,000 kilometers away in Potsdam, Germany, Sendker decided to take action and address the soldiers directly.

"I do not know why you joined the army," Sendker begins his open letter. Perhaps because their fathers and grandfather were in the Tatmadaw, as the armed forces are called in Myanmar. Perhaps because they really wanted to defend the country? Or because military service was the only decent prospect in getting a job, Sendker ponders. "But I am sure," the author continues, "that you did not join the army to kill unarmed demonstrators.... Do not let your superiors fool you. Do not obey those orders."

During his many conversations while doing research, Sendker learned that many ordinary soldiers simply wanted to feed their families when they started out. Now, they may end up standing face-to-face with their own relatives during demonstrations. "I know you may only follow orders. That is what a soldier is suppose to do you might want to say. But not all orders are created equal," Sendker continues to write. "The order to shoot unarmed people is a crime. There is no justification for it under any circumstances." 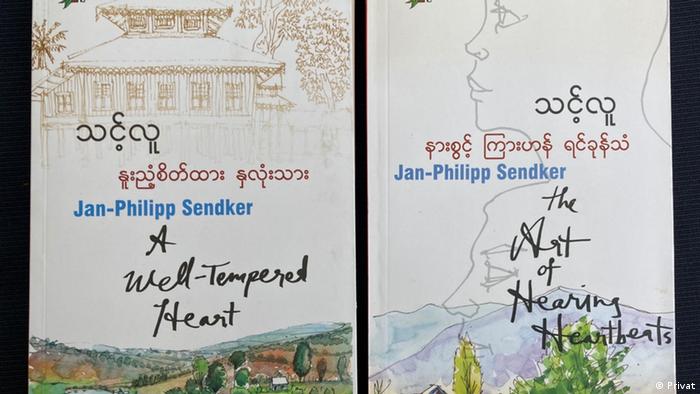 "Resist," the writer encourages the soldiers, and shows a picture of himself with the three-finger salute, the gesture of protest. It's not about being a hero, says Sendker in an interview with DW, and admits that he doesn't know whether he would be so courageous himself in such a situation. But there are many ways to resist, he says: "Just aim higher. Shoot in the air."

With his open letter, the writer aims to show a different perspective. The current tense atmosphere in Myanmar paints a black and white picture: the military versus the civilian population. Although Aung San Suu Kyi has been the de facto head of government since 2015, it has nonetheless remained forbidden to openly criticize the military. Protesters are now making up for lost time, carrying caricatures of the military chief and posters reading "Freedom from Fear," the title of Aung San Suu Kyi's 1991 book, through the streets. They are no longer afraid.

Encouragement from readers in Myanmar

Jan-Philipp Sendker's open letter has been well received. Initially published in English, it was translated into Burmese shortly thereafter and shared nearly a thousand times. "I wish they can disobey the order like you said," wrote one user from Myanmar. Many more expressed gratitude for the support, saying, "Thanks for standing with us."

For decades, the country was isolated. When the political situation began to thaw, an influx of tourists came into Myanmar and broadscale cultural exchange became possible. This time, with the third military coup, the situation is different, not only in terms of mass protests, but also in terms of international attention, networking and support.

In his novels, Jan-Philipp Sendker has previously criticized the military. In A Well-Tempered Heart, for example, he writes of human mine detectors: the military is said to have kidnapped young men and sent them into minefields. Sendker was surprised that the book ended up being published in Myanmar in 2017.

"My translator at the time said that as a foreigner I had a kind of fool's license. A local writer probably would not have been able to express himself in that way," he said. 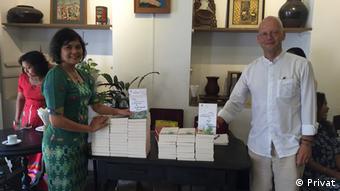 On a reading tour: Jan-Philipp Sendker and his publisher in Myanmar

Not only that: A talk about the novel was even broadcast on the radio in Myanmar. In this public forum, Sendker's readers asked about his research into military crimes — such questions could have been punished with draconian reprisals just a few years before. "The fear was gone from their faces," the writer recalls of his listeners in audiences durinng his reading tours. It surprised him how little some readers knew about the atrocities committed by the military — and how strong the desire was to come to terms with the past.

Now, the past has become the present again virtually overnight. But Myanmar is no longer a secluded country; the younger generation in particular does not want to give up its freedoms. "Something new is happening there," Sendker says. But the crowd this time is bigger, more diffuse, stronger. February 1, the day of the coup, triggered something completely new, the writer hopes — quite different from what the military had intended.

Myanmar: Protesters hit with stun grenades ahead of ASEAN talks

Police used stun grenades and tear gas against demonstrators, following the bloodiest weekend of the protests. Meanwhile, ASEAN leaders are calling for dialogue between Suu Kyi and the military.

Myanmar's artists fight back after coup

Art under a military regime? Artists in Myanmar definitely don't want that and are creatively fighting against the coup to bring democracy back.

Opinion: Myanmar sanctions will not stop the bloodshed

As more Myanmar anti-coup protesters die at the hands of police, Yangon-based journalist Zeya Thu told DW that both Myanmar's Asian neighbors and the West need to support peace negotiations.