Myanmar independence hero Aung San back in the limelight | Asia | An in-depth look at news from across the continent | DW | 07.10.2011

Myanmar independence hero Aung San back in the limelight

Portraits of Myanmar's founding father, Aung San, have been put on display in a bid to reinstate him. There are also plans to put his portrait on the bank notes. 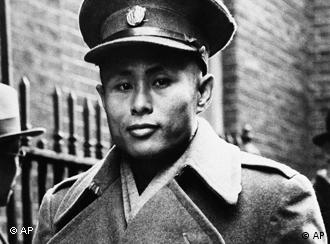 Myanmar's President Thein Sein held conciliatory talks with opposition leader Aung San Suu Kyi in August. One of the issues under discussion was the idea of reintroducing her father's image to public life in the country. A portrait of Aung San, an independence hero and founding father of the Myanmar army, was to be seen hanging on the wall behind Thein Sein and Suu Kyi as they shook hands for state media at a meeting seen as an act of reconciliation between the ruling elite and Suu Kyi.

Observers said that Thein Sein, who took office in March, has acknowledged that he needs Suu Kyi on his side to achieve his goals: securing the position of the military establishment that still runs the country, ending Myanmar's pariah status in the world community and easing economic sanctions. 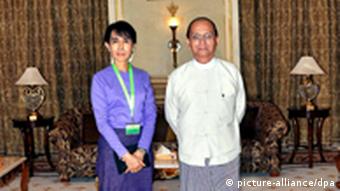 President Thein Sein is a follower of Suu Kyi's father

Khin Maung Swe, the leader of the National Democratic Force, an opposition party in parliament, describes the move as a message sent by Thein Sein "to the people that he is a follower of Aung San." He also interpreted the decision to hang a picture of the leader of the independence movement in his office as a sign that "he will not deny the Aung San image."

Tin Oo, the deputy leader of the National League for Democracy viewed the development positively: "Now younger soldiers are beginning to understand who the hero of independence and the father of the army was. So long as we can make one inch of progress, we will work together."

German news agency dpa reports the National Democratic Force, a breakaway faction from National League for Democracy, plans to propose to parliament that General Aung San's portrait be reinstated on the kyat bank notes, a practice that was discontinued under the rule of Than Shwe's military junta.

Children are now openly selling small posters of the general and his famous Nobel Peace Prize-winning daughter in Yangon, the country's largest city. State-controlled media have been full of articles about the Aung San legacy in recent weeks. 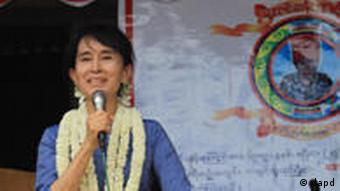 Robert Taylor, author of “The State of Myanmar” said, "If the regime thinks that Aung San Suu Kyi will now play ball, then reviving Aung San as the father of it all is fine with the army." He added that as Aung San was the founder of the army, his reinstatement marked a return to more normal relations between the military and civil society.

However, well-known Myanmar expert and author of "The Land of Jade" Bertil Lintner accused the military of hijacking Aung San and Aung San Suu Kyi for their own purposes. Indeed Suu Kyi has been criticized by opposition politicians for agreeing to meet with Thein Sein before the new government had made any substantive concessions, such as freeing around 2,000 political prisoners and opening peace talks with ethnic minority rebel groups, which have been fighting the army for decades.

Myanmar's democracy leader Aung San Suu Kyi has met President Thein Sein - another sign that the regime is reaching out to its opponents. (19.08.2011)

US envoy to Myanmar to meet pro-democracy icon Suu Kyi

The new US envoy to Myanmar, Derek Mitchell, kicked off his first trip to the country on Friday as part of Washington's strategy of engagement with the army-dominated nation. (09.09.2011)