New reports have spread on social media of police firing into crowds of anti-coup protesters during a night vigil for those arrested. 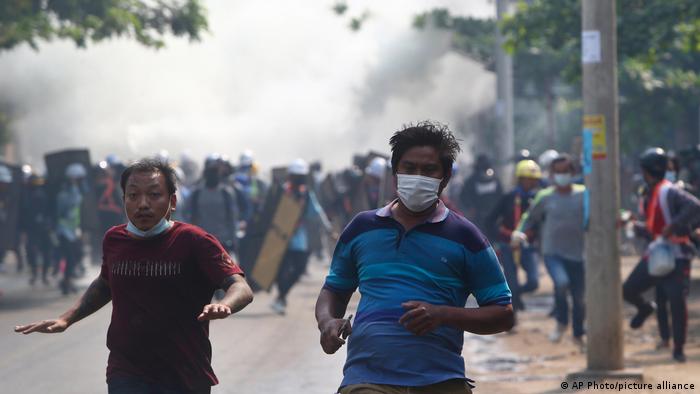 At least seven people were killed Saturday during anti-coup protests in Myanmar, as security forces continue to use deadly force against peaceful demonstrators.

Four people were reported killed in Mandalay after police opened fire on a sit-in protest. Another two people died in the town of Pyay and one in a suburb of Yangon, reported the Associated Press.

What evidence exists of police violence?

Security forces have been using increasingly brutal tactics to suppress a nationwide protest movement opposing the military takeover of the democratically elected government on February 1.

Domestic media reported that two protesters were killed overnight in Yangon's Tharketa district after police shot at a crowd of people who had gathered outside a police station demanding the release of detained demonstrators.

Thousands of people gathered Friday night in central Yangon to hold a vigil commemorating protesters who have died. At least 70 people have been reported killed so far.

On Thursday, at least 10 demonstrators were killed in separate protests across the country. Six people were killed while demanding the release of prisoners at a police station in a central Myanmar town.

What are protesters saying?

"They are shooting people, they are arresting people it is very dangerous," Phyu Phyu Thaw, an activist in Yangon told DW on Saturday.

"They are so brutally beating people. I saw people bleeding on the street. They are killing their own people now," she added, describing the military's action against protesters.

Thaw said the protest began around 9 a.m. local time and police began cracking down by the afternoon.

DW spoke with an activist in Mandalay who said security forces acting "in a very coordinated and systematic way."

"They raided a six-story building, and two snipers got on the roof and they started shooting random people," the activist, whose name is being withheld for their protection, told DW.

"Up to 20 people were shot directly by snipers" at the protest in Mandalay they added.

Saturday's protests were planned to mark the anniversary of a 1988 uprising against the then-military government following the killing of a university student.

The campaign came to be known as the "8-8-88 campaign," as the demonstrations peaked in August of that year.

The army crushed the uprising and at least 3,000 people were killed. It was during this time that the leader of Myanmar's ousted civilian government, Aung San Suu Kyi, grew to political prominence

Washington is also ramping up pressure against junta leaders, initiating sanctions against family members of junta leader Min Aung Hlaing earlier this week. The US has already tightened export controls on Myanmar.

The UK on Friday warned its citizens to leave Myanmar, saying that "levels of violence are rising."