Is good cheer an effective weapon against a worldwide epidemic? Indeed: operatic melodies can reduce inhibitions - including those about contributing to a cause - as was demonstrated at a gala event in Bonn on Saturday. 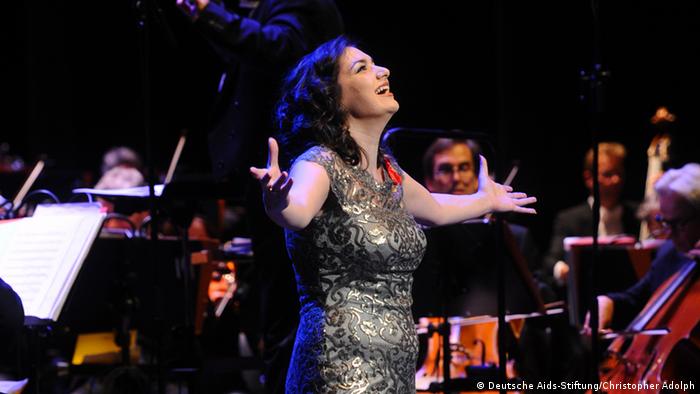 On one hand, a worldwide plague and the difficult, often desperately sad struggle against it. On the other, vocal acrobatics and arias about love and intrigue.

How do the two fit? Eckart von Hirschhausen, master of ceremonies at the Fourth Festive Opera Gala in Bonn for the German AIDS Foundation, explained: music has the power to heal. It is the art form that stimulates the brain more than any other. Music is with us from our time in the cradle - or even before: the first sound a human being hears is that of his mother's heartbeat, in the womb. The soothing quality of rhythm is experienced before birth.

If asking for charitable contributions, it's helpful to use an instrument with a positive image: music. Ulrich Heide, managing director of the German AIDS Foundation, knows that well: the Bonn event on Saturday was the 40th of its kind. Other AIDS galas take place regularly in Düsseldorf and Berlin.

Yielding more than 153,000 euros ($171,000), this year's gala was the most financially successful among them. The foundation puts the money to clear and understandable use: preventing the transmission of the AIDS virus from mother to child in an African country, for example, costs only 500 euros ($560). In this instance, in effect, it's the cost of a human life. 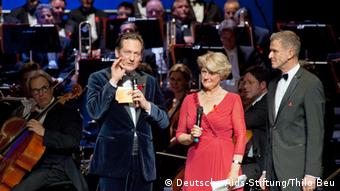 Seasoned concertgoers might have had reservations ahead of the event: a benefit for a grim cause with long speeches in a four-hour marathon and featuring relatively unknown young singers rendering selections from the "Top 50" tunes in the operatic repertory.

But those negative expectations were not fulfilled. Instead, Helmut Andreas Hartwig and Arndt Hartwig, the initiators of the Bonn gala, gave a lively introduction. The event's sponsor, Monika Grütters - Germany's minister for media and culture - gave a moving speech. DW Director General Peter Limbourg pointed to his broadcaster's international distribution of the event - also by means of an audio livestream.

German actress and comedienne Hella von Sinnen recalled the early days of the AIDS crisis in Germany over a quarter century ago. She spoke of the fear of discussing the theme of a mysterious sexually-transmitted disease - and the overcoming of the taboo by the then minister of health, Rita Süssmuth - who was in the audience on Saturday.

The future of music 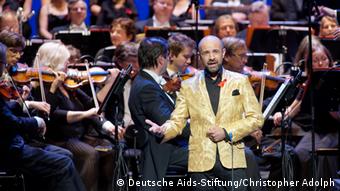 If Saturday's concert was a pre-taste of the future of the operatic genre, it seems to be in good hands - or vocal chords. Korea's Sumi Hwang enchanted with her highly emotional soprano, Italy's Leonardo Caimi with his tender yet powerful tenor. Breakneck coloraturas by French mezzo soprano Karine Deshayes contrasted with the luminance of German Wagner and Strauss soprano Manuela Uhl, who sang Beethoven and Pucchini.

A Ukrainian mezzo from the Crimea - Lena Belkina - and a Russian baritone from Novosibirsk - Roman Burdenko - gave fresh meaning to an oft-heard cliché: making music doesn't solve political conflicts, but certainly can ignore them.

The world of classical music has long been one of the most international imaginable, and Saturday's singers were further proof: a Guatemalan-born, half-Chinese tenor, Mario Chang, next to the French-Nigerian soprano Omo Bello and an Australian-born, British-educated resident of Italy: soprano Jessica Pratt.

Added to the mix was Max Emanuel Cencic, a countertenor based in Austria with one of the best founded and rounded, most healthy voices of that difficult vocal range. Italian soprano Maria Pia Piscitelli rounded out the 11-member cast of soloists. 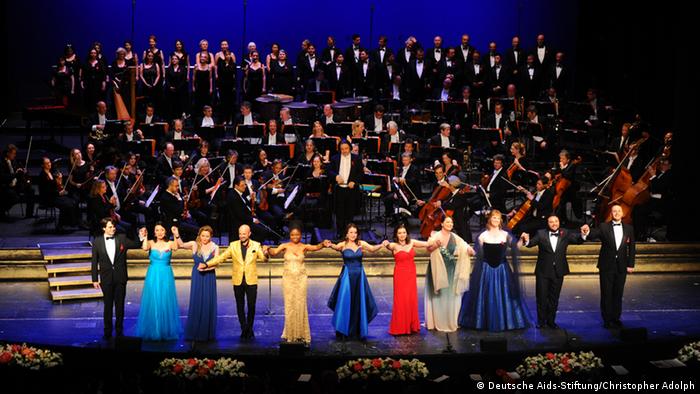 Everyone chimed in with some Verdi at the end

In all that, there wasn't a single missed note or moment of weakness in more than two hours of music - unusual even for the most prestigious opera houses and festivals. And in between the moments of grand opera and high emotion, there were gentle reminders by MC Eckart von Hirschhausen: when it comes to combating AIDS, much remains to be done.

Opera Gala: The stars speak out

Eleven international opera stars have blocked the day in their datebooks. They are performing at the Opera Gala of the AIDS Foundation in Bonn free of charge - and told DW why. (09.05.2015)