Munich residents take courage classes in light of deadly beating | Germany | News and in-depth reporting from Berlin and beyond | DW | 06.09.2010

A beating at a train station near Munich last year left a man dead and had many people wondering how they would have reacted. Now, a police seminar is providing answers on what to do in a public emergency. 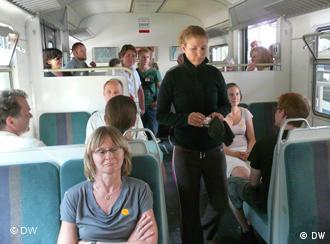 Seminars in civil courage are held in real train carriages

The train station in Solln, a suburb of Munich, isn't particularly noteworthy. Here, the city's apartment buildings have given way to family homes with gardens. Trains running on just two tracks service Solln's station, which is right next door to an elementary school. But despite being nondescript, nearly everyone in Germany has heard of the Solln train station.

It was here that Dominik Brunner, a 50-year-old business man, was beaten up by two teenagers last September. He later died in hospital. Brunner had stepped in to stop the teenagers from bullying some young boys, and was praised as a hero for his civil courage. 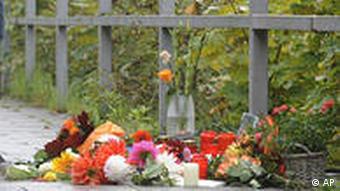 The brutal beating at Solln shocked the German public

But not everyone would have gotten physically involved in the situation. Passengers at the Solln station had mixed feelings about how they would have reacted.

"I would think twice," says one man. "If someone gets hurt while trying to defend others, and the injuries kept them from working, they wouldn't get any financial support or a new job, even though they were just trying to help."

One woman waiting for the train at Solln said she would have tried to call the police and at least get the children out of harm's way. Another man says he would only get involved if he thought he had a physical advantage.

It's a difficult hypothetical question to answer, but to help people prepare should they ever become involved in an emergency, police in Munich are offering seminars aimed at boosting civil courage.

The seminars are held in the German Transportation Museum in Munich. Among the classic cars, motorcycles and locomotives on display, the museum has an actual train car just like the ones used in Munich today. The two police officers running the course, Sandra Weiss and Sandra Dubiel, use the train car to conduct role playing exercises. After the participants take a seat on a simulated train ride through Munich, Officer Weiss - playing the role of the bad guy - enters the train.

Under the friendly pretence of asking an elderly woman for a cigarette lighter, Weiss gets the woman to open her purse. Then she steals the woman's wallet. 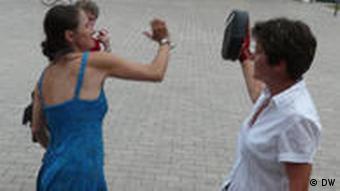 The police want citizens to respond to crime, in whatever way they can

"I was aware that someone had been robbed," says Wirth, "but there were just a few seconds where I didn't know how to react. All these possibilities went through my head but I couldn't decide what to do. Then the thief was gone."

Back in her normal role as a police officer, Sandra Weiss says people generally want to help in these situations, but they freeze up.

"I describe it as being stuck in a holding pattern," she says. "People think: 'I need to help. Yes - right - okay, I should help. But… how?' That's what we're hoping to address with the course. We want people to consider ahead of time - what would I do if something happens?"

A situation can often be defused simply by taking control verbally. The Munich police say just over 68 percent of conflict situations can be stopped verbally. Had the victim of the theft forcefully said 'No! Take your hands out of my purse!' rather than passively allowing the thief to search for a cigarette lighter, the situation may have been avoided. Any of the passengers could have also physically restrained the criminal with no legal consequences.

Any reaction better than no reaction

Or course, not everyone is going to be prepared to get physically involved in a confrontation - and police say that protecting your own safety is the most important.

"Civil courage just means that a person goes through life with open eyes and does something rather than just look away," says Sandra Dubiel, the other officer conducting the course. "No one has to get physically involved, but anyone can call the police. The worst thing is to look the other way. That's what we don't want." 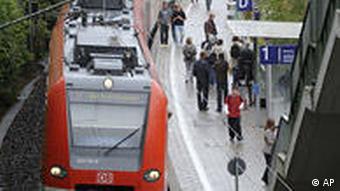 When situations arise, commuters often don't know what to do

In addition to learning verbal means of defusing tense situations and alternatives to getting directly involved - such as calling the police - Officer Dubiel uses sparring gloves to demonstrate some basic self-defense maneuvers in case of a personal attack. But, she adds, the techniques should only be used to create a chance to escape a dangerous situation, not to win a fight. When self-defense techniques are used, a confrontation is stopped eighty-four percent of the time

A chance to feel prepared

At 70 years old, Paula Stocker says she isn't likely to jump in the middle of a fight, but she takes a swing at the sparring gloves anyway. She feels like the course has given her tools to react in some way if there was an emergency.

"I feel safer, and more prepared," Stocker says. "I'd also be happy if something ever happened to me that the people around me would have these tips ready, too."

Participants in the course are also taught to use AED (automated external defibrillator) devices that are often found in public places such as train stations. An AED can improve a heart attack victim's chances of survival by delivering an electric shock to the heart to restore normal beating rhythm.

The public interest in civil courage has grown since Dominik Brunner's death, and the seminars teaching tips for reacting to any emergency situation - violent or otherwise - are generally booked quickly.

German courts are reluctant to abandon practice of preventive detention

Under current German law, courts can rule to keep violent offenders imprisoned indefinitely. The European Court of Human Rights in Strasburg has ruled this preventive detention is an affront to human rights. (23.07.2010)

Deadly beating in Munich sparks debate ahead of elections

A deadly beating in broad daylight has sparked a new debate in Germany on the sensitive topics of public safety, civil courage and juvenile justice, shortly before national elections. (14.09.2009)

They're known in Italy as "ronde" or vigilante groups patrolling major cities. Those who volunteer for them say they help deter street crime. But critics say they're a platform for politically motivated bullies. (08.07.2009)