In an exclusive interview with DW, Mozambican opposition leader Afonso Dhlakama claims the government is planning to assassinate him. He also listed conditions for new peace talks. 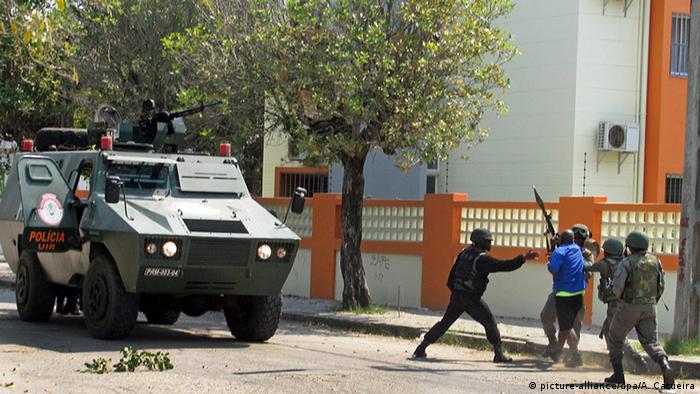 Dhlakama the leader of the Mozambique National Resistance (RENAMO) accused the ruling party the Mozambique Liberation Front (FRELIMO) of deploying government troops to his base. He hopes that the talks with the government of President Filipe Nyusi will bring about lasting peace in the country.

"The soldiers are in Gorongosa because FRELIMO decided to kill me and to sow confusion." Dhlakama claimed that he had escaped in 2015 three assassination attempts in September and October.

DW: We have reports that the military is surrounding the Gorongosa Mountains. Can you confirm this?

Afonso Dhlakama: Yes I do. There are many elements of FRELIMO's Rapid Intervention Force here in the region of the Gorongosa. They are trying to intimidate us. But we knew this was going to happen. FRELIMO's strategy seems to be to stage attacks here where I am to force me to abandon the Gorongosa region and go to Maputo. They are acting in bad faith, because we have already formed a delegation which has already met with a FRELIMO delegation, and which will meet again on Monday (30.05.16) to discuss the topics which are to be included in future negotiations. So, if they are deploying men to besiege me, and the base, and shoot at us, that means that they do not really want to negotiate. They just want the Europeans to believe that they are interested in negotiating. Because they know that the RENAMO's demands are legitimate. This is why they are hindering talks. I say they are hindering them, because if I had sent 300 armed men from the Gorongosa or from Sofala to surround President Nyusi's palace in Maputo, or even if I had stationed them 30km from Maputo, there would be a worldwide ado about it. The European Union would have condemned me. They would call me a terrorist. All the ambassadors would be calling me. My image would suffer. But nobody seems to be bothered about government troops here in Gorongosa, although our spokesman has been informing the world about what is happening. Nobody is condemning this siege; it is as if we were animals. Even our international friends who seem to be acting in good faith and want to help should know that there can be no serious negotiations in Maputo if RENAMO's leader, who orients the team of negotiators, is besieged.

You just mentioned a first contact between the negotiators for RENAMO and the government. What are RENAMO's demands?

We don't have many issues. Everybody knows what RENAMO wants. To start with, we want FRELIMO to understand that peace, democracy and the rule of law are only possible if Mozambican institutions work properly. Above all, RENAMO wants its strategy of governing its six provinces where RENAMO won the elections accepted. This is our main demand. We don't want to divide the country. We can negotiate a reform of the constitution. Because a document which affects the lives of everybody cannot be imposed upon us by half a dozen people in Maputo, who curtail the freedom of those voting for the parties. FRELIMO and the international community must understand that RENAMO is not taking back this demand. It is not just we who demand this. It is the demand of millions. Although there was electoral fraud, those who voted in the provinces where we won want to see RENAMO's program put into practice in the administration‘s policies. Then there is the question of defense and security. I am talking of military concentration in the Gorongosa. We want the army and our armed men to reconcile, as established by the peace agreement which put an end to civil war in 1992. We also want our men to occupy positions of command in the army, so we can stop having in Mozambique an armed wing for the RENAMO and armed forces for the FRELIMO. There are other small issues, but we do not have an enormous list of demands, because we want a quick and serious agreement. 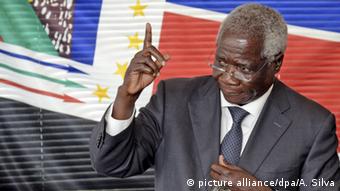 Is RENAMO going to insist on the presence of international mediators?

We have suggested as mediators the European Union, the Mozambican Catholic Church and South Africa. The government didn't want any foreigners mediating. But in any country of the world there would have to be mediation. The 1992 peace agreement was mediated by the Italian Santo Egidio catholic community and the Catholic Church of Mozambique. Everyone wants RENAMO and FRELIMO to start serious negotiations. For that to happen, we need mediators. Otherwise we might not come to an agreement. I believe we will be able to agree on the list of topics up for negotiations despite the presence of the army here in Gorongosa. And then the government will have to say something about the mediation.

Would the RENAMO want Portugal to be a mediator?

Is there a meeting scheduled with President Filipe Nyusi?

As you know, nobody rejects the idea of a meeting between the two leaders. But it must be well prepared. We cannot meet and shake hands, look into each others' eyes in the presence of the press, and then decide nothing. That would annoy the Mozambican people. And it would disappoint the rest of the world too. First the delegations must reach an agreement to justify a meeting between the leaders and for us to be able to sign something.

Would you accept the position of vice-president of Mozambique if the Constitution is amended?

No, because I do not belong to the political left. I am from the center-right. I don't see any way that either I or someone from the RENAMO could work together with FRELIMO. And it would kill off democracy in Mozambique, and even kill off RENAMO.

Do you believe there is a plot against your life being planned by the FRELIMO government?

Yes, I do, because I have barely escaped death before. You must remember that I was attacked on the road on September 12 of last year, near Chimoio in the Manica province. The same month, on the 25th, National Army Day, I was attacked by a unit of more than 250 men straight out of Maputo. They failed. On October 9 my house was besieged and taken by assault. I have no doubts whatsoever on the subject. They believe that Dhlakama's death will be the end of democracy in Mozambique, and the end of RENAMO. Because FRELIMO has never believed in democracy.

President Nyusi has told the international community that there is no war going on in Mozambique, just a couple of disturbances. Do you agree?

I think there is a war going on. These are soldiers being sent by the FRELIMO. A disturbance happens when some bandits attack a village to rape and rob. This is war. FRELIMO is still receiving arms from communist countries. Much of the money of the undisclosed debt is not a public debt. It is FRELIMO's debt. They used the money to buy arms and pay mercenaries to kill RENAMO. So this is no disturbance, it is FRELIMO‘s declared war.

Afonso Dhlakama is the opposition leader of Renamo.