Geoscientists used to think volcanic hots pots were stationary. It helped us understand how tectonic plates - and continents - moved and where earthquakes lay. Now, evidence says they aren't stationary. Time to reassess? 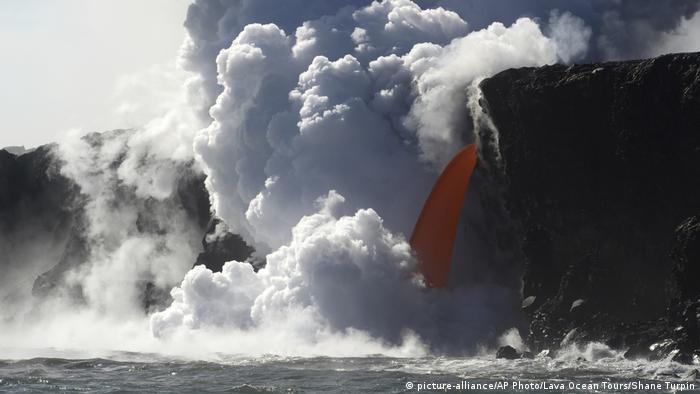 It's simple when you think about it. If you want to understand how something moves, you need a fixed point by which to compare and track its movement.

Take volcanic hot spots, for instance. Deep in the Earth's mantle - below the crust and above the core - there are plumes, areas where hot mantle wells up. Above the plumes, you get hot spots, where rock melts into magma. And it's this seething magma that burns through the Earth's crust to erupt and form volcanoes.

That's one mighty event right there. And a lot of things have to come together in one spot for it to happen.

So it stands to reason that geoscientists used to think that volcanic hot spots were stationary. It allowed them to track the movement of tectonic plates, because as the plates moved over a stationary hot spot, they left a trail, or chain, of old volcanoes behind them. Except the Earth is not always that simple.

"That was an original hot spots theory," says Bernhard Steinberger at the German Research Center for Geosciences (GFZ). "But we've known since the 1970s that if you try to explain hot spot tracks globally - in the African and Pacific hemisphere - it doesn't work that well, and that's how we started to think that hot spots move."

The theory was used to explain the Hawaii-Emperor seamount chain at first. But doubts grew due to a sharp, unexplained bend of about 60 degrees, which formed roughly 47 million years ago.

If that was caused by tectonic plate movement, GFZ researchers say it would have taken a significant shift in direction by the Pacific Plate. But they found no evidence to support that. Instead they believe the Hawaii-Emperor seamount chain must have suddenly moved south, and then stopped.

"We have new evidence that the Hawaii hot spot moved and that it moved particularly fast about 60-50 million years ago," says Steinberger. "We can determine the relative motion from the ages [of volcanoes] along the Hawaiian and the Ruturu seamount chains."

Scientists already knew that a third seamount chain, called Louisville, moved relative to Hawaii-Emperor. But they now also say Hawaii-Emperor moves relative to Ruturu, and because Ruturu and Louisville are relatively stationary, "that makes it very unlikely that any of the other hot spots have moved," says Steinberger. "All the evidence points towards Hawaii-Emperor as being the one that moved."

Still with us? Good.

You may be wondering at this point, "Why should I care?" And it'd be a fair question. So let us try to answer it.

First, it's important to remember that while a lot of the talk is of hot spots, we're talking about the movement of tectonic plates.

Kevin Konrad of Oregon State University in the US is first author on the new study, published in Nature Communications. Konrad says that understanding the movement of tectonic plates is "vital for reconstructing the past position of continents, modeling the flow of the mantle, understanding the locations of earthquakes and determining the origin of many geologic features."

And since all plates move relative to each other, the only means to provide an "absolute" measure is by comparing plate movement to a stationary reference point, like a deep mantle plume - or a hot spot. "Therefore," says Konrad, "volcanic hot spot chains potentially provide a unique window into the past motions of tectonic plates."

But, as we've discovered, not all hot spots are stationary. And that complicates the job of modelling tectonic plate movements.

Konrad says scientists will have to reassess their previous work. But he remains optimistic. There have been similar conclusions before, but "this is like a missing link."

His German colleague, Steinberger, says the new research reassesses and betters his own past work.

But there's one last thing. What does this tell us about volcanoes? Should we be more or less scared of them? If a hot spot moves about one centimeter per year, is there any chance that an ocean volcano might one day - in a matter of a few million years - erupt somewhere on land? Short answer: no.

"There's no direct practical application like that," says Steinberger, a little lost for words. "We can use the models that explain the past to predict movements in the future. But we're talking about movements on a million-year timescale, so we won't be able to predict the next volcano."

The Hawaii-Emperor hot spot, meanwhile, appears to have slowed. It's getting more and more stable as the million years go by. In fact, says Steinberger, you could say the theory of stationary hot spots is becoming relevant again.