Move to Make German Language ′Official′ Alarms Some | Germany| News and in-depth reporting from Berlin and beyond | DW | 26.12.2008

If he were alive today, US humorist Mark Twain might have been mightily amused at efforts by Chancellor Angela Merkel's party to have the German language officially enshrined in Germany's constitution. 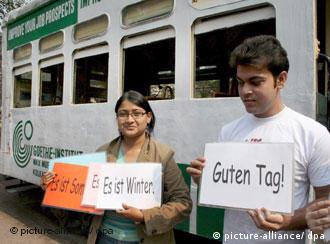 Fewer people around the world are learning German nowadays

Twain never ceased to poke fun at "Die Deutsche Sprache" after struggling to master the language during a visit to Heidelberg in the 19th century.

"My philological studies have satisfied me that a gifted person ought to learn English (barring spelling and pronouncing) in 30 hours, French in 30 days, and German in 30 years," he wrote in a humorous essay titled "The Awful German Language" after a visit to imperial Germany in the 1880s. 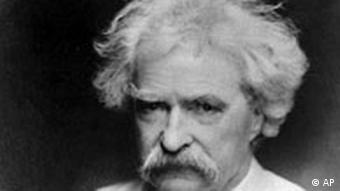 "Only the dead have time" to learn German, said humorist Mark Twain

"It seems manifest, then, that the latter tongue ought to be trimmed down and repaired," he wrote, tongue firmyl in cheek.

"If it is to remain as it is, it ought to be gently and reverently set aside among the dead languages, for only the dead have time to learn it."

German to become the official language?

Not that members of Merkel's conservative Christian Democratic Union (CDU) paid any thought to Twain's caustic observations, made 120 years ago, at their recent party conference in Stuttgart.

Overwhelmingly, they approved a resolution -- despite Merkel's reservations -- calling on the German parliament to enshrine the German language in the constitution.

Article 22 of the constitution already states that the nation's capital shall be Berlin, and the flag shall be black, red and gold, but hitherto has made no reference to the German language.

That will change if the CDU's proposal wins approval in parliament and the sentence, "The language of the Federal Republic of Germany shall be German," is incorporated in the constitution. 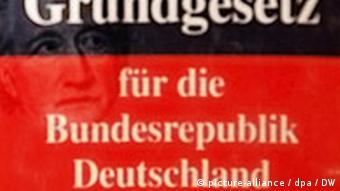 German has never been a very popular language, despite the efforts of its classic writers Goethe and Schiller.

Its popularity plummeted after two world wars, but in the early 1990s German enjoyed a temporary renaissance after German reunification.

Of the 20 million people learning German around the world, two-thirds of them were in Eastern Europe and the former republics of the Soviet Union.

Now, however, interest in learning German is down. In Britain, the number of students studying German has been on the wane for years.

A move against the Turkish community?

Instrumental in the push to have German enshrined in the constitution is the fact that Germany today is home to more than 3 million people of Turkish descent.

Overall the country has has more than 10 million immigrants, almost double the number found in Britain.

In Berlin's large Turkish community, many people who have been in Germany for years or were even born in the country have difficulty speaking the local tongue. German is a minority language on many school playgrounds in some districts.

This is a point taken up by Peter Mueller, the premier of the state of Saarland, who speaks of the CDU needing to clarify "what the nation stands for."

When people fail to speak German, the promise of social mobility is an empty one, he claimed. 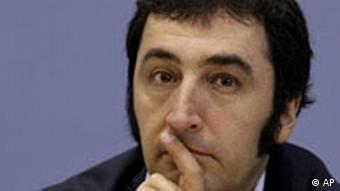 The debate renewed after Cem Odemir, head of the Green party, proposed the teaching of Turkish in schools

"It's absolutely normal that the German language should be written into the constitution," she says. "Learning and mastering a national language is the key to successful and sustainable integration."

The CDU's move to amend the constitution makes many uneasy, including immigrant groups, left-wing Social Democrats and members of the Green Party.

"This kind of thing is not necessary. I don't know what kind of signal they're trying to send," argues Gerd Pflaumer, a spokeman for the anti-discrimination group Action Courage.

Aylin Selcuk, a Turkish community youth leader who has advised Chancellor Merkel, agrees that immigrants need to get ahead in life, but questions the CDU's true motives in wanting German included in the constitution.

Cem Ozdemir, the new co-leader of the Greens, called recently for the introduction of optional Turkish-language courses in public schools -- a proposal that outraged some conservatives.

Ozdemir is of Turkish descent but was born and educated in Germany.

The conservative party's move, however, may also be aimed at guarding against the rapid spread of "Denglish" -- English words and phrases such as Coffee to Go, Fast Food, Babysitting, Breakfast, Sixpack and Let's Go, which have found their way into the German language in recent years. 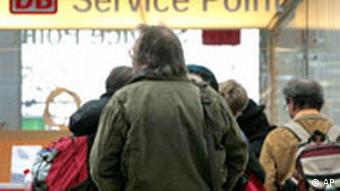 "Denglish" words pop up all over the country

Herr and Frau Deutsch round up "die Kids" to catch an InterCity train at the station, after having found information on schedules at a Service Point desk.

Some linguists are alarmed. "Will we all be speaking Denglish soon, or will it be Germeng?" wrote professor Rudolf Hoberg in an anthology of essays on the state of the German language at the turn of the century.

Officials at the Goethe Institute, which promotes the German language abroad, say there is always an on-going enrichment of the language, which involves absorbing words from several languages, including English, Latin and also Turkish.

But they say things get ugly in everyday language use when foreign words get shoved into a German sentence, or vice versa.

"We are not language purists at the Goethe Institute, but we do have respect for the English language, as well as our own," said a Goethe Institute official. "The language gets polluted when foreign words are popped for no reason into German sentences, simply because they are considered 'attractive, trendy or cool.'"

Popular New York born entertainer Gayle Tufts, who has made her home in Berlin, delights in teasing German audiences with her own strange mix of German and English which she calls "Dinglish," rather than Denglish.

In 1998, she even wrote a book in Dinglish called Absolutely Unterwegs (Absolutely on the Road), increasing her popularity still further among "The Krauts."

Tufts whimsically insists her Dinglish was an invention of necessity as she could not wait to learn the grammar.

German is losing popularity as a foreign language taught in British schools, a new study shows. (05.12.2008)

A three line clause in a 400 page proposal at a Christian Democrat party conference has revived an old debate. DW's Peter Stuetzle comments on a move to make German the official language of Germany. (03.12.2008)