Moscow calls West′s bluff ahead of Syria talks | World | Breaking news and perspectives from around the globe | DW | 05.06.2013

Russia and the West are heading for a collision course as they hash out preconditions for a possible Syrian peace conference. It appears that both sides are locked into a cycle of escalation over the country. 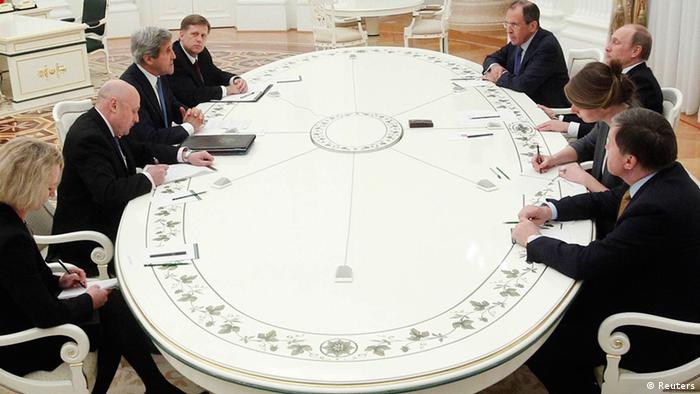 Some time this month, several major countries are supposed to gather in Geneva for a peace conference on Syria. But with the European Union ending an arms embargo for the Syrian rebels, and President Vladimir Putin defending Russia's right to sell arms to President Bashar al-Assad's regime, the possibility of the two sides even reaching the negotiating table seem at the moment fairly remote.

In attempt to hash out these differences - and the fact they are effectively supplying hardware to two sides of a bloody, two-year long war - the EU and Russia held a full day of talks in the industrial Ural Mountains city of Yekaterinburg on Tuesday. 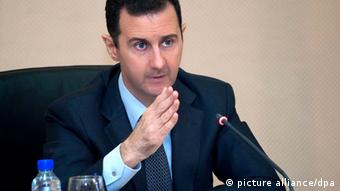 The bottom line in the talks remains the fate of Assad

Putin highlighted the roaring trade between Russia and the EU as a clear indication of how good bilateral ties are, before turning to Syria and putting a damper on affairs. Russia, he said, was only fulfilling deals struck before the war in Syria began in 2011 by delivering a long-range S-300 surface-to-air missile system to Assad. He added that the rockets would not be delivered until late this year at the earliest.

But these legal niceties are unlikely to quell regional tensions, especially after Assad told Hezbollah-backed Lebanese channel al-Manar last Thursday that he already had sufficient stockpiles of Russian weapons to pose a threat to Israel.

When it comes to Syria, it may have been difficult for either side to decide which one of their differences to address first.

"There's the question of preconditions, in terms of Assad's fate, and secondly the potential role of Iran," said Julien Barnes-Dacey, senior Middle East analyst for the European Council on Foreign Relations. "For Assad and his backers, the Russians and Iranians, it's clear that Assad is in a strong enough position that the West and the opposition can't insist on his demise as an inevitable outcome of these transition talks. Whereas the opposition recently said that they wouldn't attend unless it was clear that Assad would step down, either before or as a result of the talks."

For the US, on the other hand, Iran remains a particular problem. "The opposition and some countries in the West have said that Iran can't attend, it's too much of a spoiler, and is playing such a detrimental role on the ground," Barnes-Dacey told DW. "Meanwhile the Russians are saying that Iran is an integral player in the process, and must be at the table."

Ultimately it's clear that the rift boils down to the fact that the Russians and the Iranians believe that Assad should be an ongoing voice in a diplomatic process, while the US, the EU, and the opposition are determined to bring the Syrian president's reign to an end. 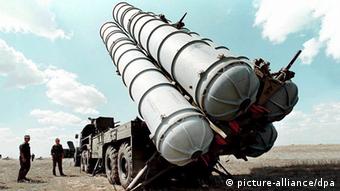 Nevertheless, Russia has apparently decided to test that determination - which is why the EU's lifting of the arms embargo was promptly matched by Putin's declaration that Moscow had the right to support Assad. "I think it was a big mistake of the EU, if only because everyone knew that that was an empty bluff, because of the legal and political constraints," said Barnes-Dacey. "And then the Russians come in and quite actively up the ante, and say, 'We will respond to that by providing significant hardware in terms of new anti-aircraft and MIG jets.' "

"The external parties supporting the two sides are backed into this cycle of escalation," he concluded. "Clearly if both sides are talking about providing heavy arms and more and more weaponry, the chance that domestic players in Syria will realize that they have to cut a deal is less likely to bear fruit."

Pieter Wezeman, senior researcher in the arms-transfer program at the Stockholm International Peace Research Institute (SIPRI), put it more bluntly. "I think there is a major risk that the conference will be a complete failure," he told DW.

Nothing shows that more clearly than the extent of Russia's arms deals with Syria over the past few years - Moscow has been supplying Assad both with air-defense systems and with weapons it can and has used against the rebels.

"What Russia has been delivering - from 2007 onwards and it hasn't really stopped - was a whole of range of equipment," said Wezeman. "The Russians have already helped the Syrians to upgrade their air-defense capability, and that increases the threshold for anyone from the outside - be it Israel, NATO, or the US - to try to do anything similar to what happened in Libya."

Wezeman believes Russia has barely disguised its policy of providing Assad with the means to defend his regime from external attack. "They've also supplied anti-ship missiles with a significant range, and those help Syria to deter an intervention," he said. "That's not to say that NATO or Israel could not defeat these systems, but I think they would have a much harder time to intervene by, for example, putting up a no-fly zone." 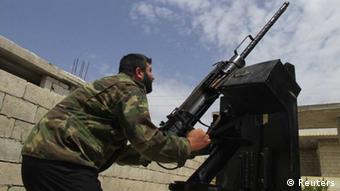 On the other side, meanwhile, it is clear that the EU has no intention of backing the rebels to the same extent. Moreover, as Wezeman points out, the EU's lifting of the embargo was extremely inconsistent.

"Just look at, for example, South Sudan," he said. "The EU maintains an arms embargo on South Sudan, despite the fact that it is friendly with the South Sudanese government. At the same time, they're saying it's a conflict there, so we shouldn't supply arms."

The other major obstacle is the extreme diffidence in the US and the EU - even in France and the UK, the two countries that pushed through the lifting of the embargo - about supplying weapons to the rebels. "I think there is a very strong realization in these countries that there are major risks involved - weapons may end up in the hands of the wrong rebels, and that weapons that are supplied may end up elsewhere and stoke the conflicts in Iraq and Lebanon, or even Turkey," said Wezeman.

"We will have to see how far they are willing to go and under which conditions," he added. "And to what extent this was mainly a bargaining tactic on behalf of the UK and France towards both the Syrian regime - and Russia."

By sending help to Syria's warring factions, Iran, Saudi Arabia and Qatar are struggling to gain influence in the Middle East. The conflict between Sunnis and Shiites has become a proxy war over strategic regional goals. (30.05.2013)