The civil war in Syria has spilled over the border to Lebanon. Rebels and supporters of the Assad regime are fighting in Tripoli, rockets are hitting Beirut and Hezbollah is sending fighters into the fray. 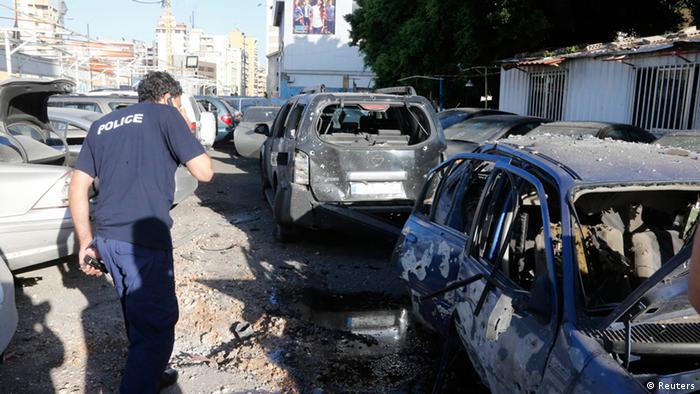 On Sunday, (26.05.2013) two rockets slammed into a Beirut district controlled by the Shiite Hezbollah organization. Shortly before the attack, Hezbollah leader Hassan Nasrallah stressed that the group would be on the side of Syrian President Bashar Assad until victory.

In the northern Lebanese city of Tripoli, more than 30 people died in the past week in fighting between rebels and Assad supporters. The political system of Lebanon is completely paralyzed, leaving Beirut without an effective government. The general election, originally scheduled for June, is in doubt.

The latest reports indicate that about 1,700 Hezbollah fighters have been supporting the Syrian regime, fighting alongside government forces against the rebels who have entrenched themselves in Qusair near the Syrian-Lebanese border. Although Hezbollah has already lost more than 100 fighters, the organization has pledged to continue sending militia.

But Lebanese are also fighting on the opposing side against Assad, according to Beirut-based political scientist Farid El-Khazen, in particular many volunteers from the Sunni opposition in northern Lebanon. "For these Islamist groups Syria is the land of jihad, where they have gone to fight," El-Khazen told DW.

The rebels aren't just aiming to bring down the Assad regime, but also to harm Hezbollah. El-Khazen, a lecturer at the American University of Beirut, is a member of parliament representing the predominantly Christian Free Patriotic Movement, which works with Hezbollah on political issues.

Lebanese allies and opponents of the Assad regime have even been fighting at home. Sunnis and members of the Alawite religious community, which also includes many supporters of the Syrian regime, have taken the battle to the streets of Tripoli. 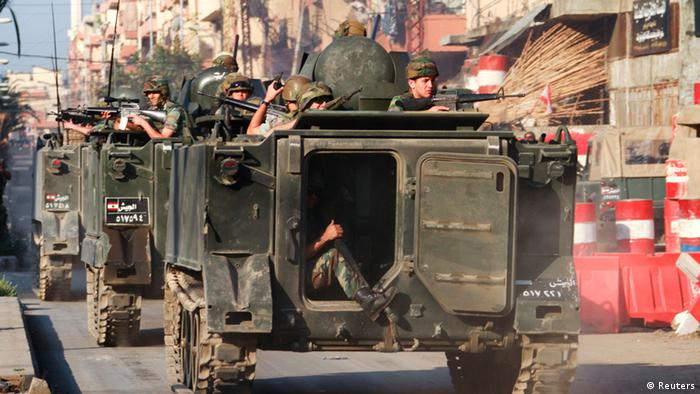 Despite military patrols, conflict has broken out in Tripoli again and again

Heiko Wimmen, a Middle East expert at the German Institute for International and Security Affairs (SWP) in Berlin, says the city has become an extended battlefield in the Syrian civil war. "The Alawites in Tripoli are paying the price for what's happening in Qusair," he said. "The fighting is revenge for the slain Sunni rebels."

It was initially unclear who was behind the missile attack on the Hezbollah-controlled area in southern Beirut, in which five people were injured. According to Wimmen, the attack was a response to the recent speech by Hezbollah leader Nasrallah in which he supported Assad.

Despite the growing tensions, El-Khazen does not expect that violence will spill over into the rest of Lebanon. "None of the major political parties want to plunge Lebanon into a war," he said. But, he warns, there are armed groups that may want to heighten tensions to benefit foreign governments.

A further escalation could be a threat in several ways. Wimmen says the Lebanese army could split along religious lines if the soldiers in Tripoli end up caught in the crossfire of the Syrian fighting. In addition, the Sunni-dominated North Lebanon could develop into a stateless space where radical groups similar to al Qaeda could gain a foothold. The extent to which these groups are operated by the Sunni parties in the area is difficult to assess.

Aside from the armed groups, the political and sectarian trenches are deepening in Lebanon. The rival political camps still have not been able to agree on the rules for the next election, namely the allocation of the 128 seats in the House of Representatives by denomination. How exactly these seats are to be elected has been highly controversial.

"The political camps in Lebanon are waiting to see how the conflict in Syria turns out," said Wimmen. Neither side wants to concede something to the other that would not have been necessary, should the conflict end in their favor. "That's why neither side will budge," he said.

If the election is postponed, the outgoing House of Representatives is likely to remain in office. However, it has no clear majority, and without a parliamentary election, the legitimacy of key decisions would likely be in doubt. Another option would be to vote under the old system. This, however, would leave out many parties.

El-Khazen's preference would be for the old parliament to carry on for the time being, even if it means postponing the election date. Wimmen, however, does not see how a compromise could work, given the deadlock.

"All the legally viable ways out of the situation are beset with many questions," he said skeptically.

What began as protests to topple Syria's regime in March 2011 has developed into a civil war. The UN says over 80,000 people have been killed. Read DW's multimedia coverage and analysis of the conflict in Syria. (28.05.2013)

The European Union, led by France and Great Britain, has decided to lift its arms embargo on the Syrian opposition. Economic sanctions, however, still remain. (28.05.2013)

The Shiite Hezbollah are fighting alongside regime troops in Syria. Much is at stake for the militant group: if Assad's regime falls, Hezbollah will be weakened in Lebanon. (24.05.2013)

Ukraine-Russia crisis: Attack will have 'consequences,' EU and US warn