Morgan Freeman has long become a household name with his inimitable voice and impressive acting skills. He turns 80 on June 1 - and has almost half a century in show business to look back on. Here are some highlights.

With one of the most unique appearances - and most recognizable voices in Hollywood - it's impossible to mistake Morgan Freeman when he appears on the big screen.

At 6'2" (1.88 meters), the freckle-faced Freeman often towers over his fellow actors. Or perhaps it's just his booming baritone that assumes his presence is imposing. That voice, after all, has served as the voice of God on more than one occasion.

Born on June 1, 1937, the now 80-year-old actor from the American South got his acting start at an early age, appearing in a school play in his Mississippi elementary school at the age of 12.

After moving around quite a bit and taking a few short breaks, Freeman got his first recurring role in "The Electric Company," a live-action sketch show on American public television that was aimed at teaching children phonetics and grammar.

The cast included Rita Moreno and Mel Brooks, and the work got him started on a path that wound through small screen roles on detective series, the soap opera "Ryan's World" and the sitcom "A Different World." In 1983, he even played Malcolm X in the TV movie, "Death of a Prophet." 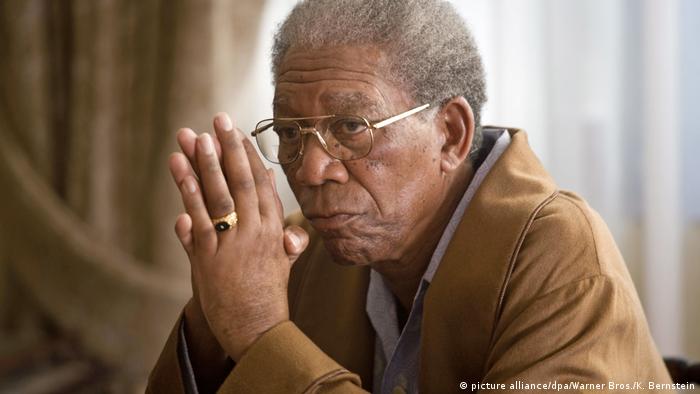 Morgan Freeman has made lighter comedies, but also socially critical films like "Invictus"

Success on the big screen

Though Freeman had a successful career in television, he became a household name in 1989 by starring on the big screen as a chauffeur to Jessica Lange, a wealthy Jewish widow, in "Driving Miss Daisy." Taking on his southern drawl and exuding a certain charm, Freeman won over audiences and began starring in wildly different roles.

While Freeman has become a prominent voice in the black community, speaking out in recent years about police brutality, his roles are as diverse as can be. In "Bruce Almighty," he narrates as the voice of God. In "The Shawshank Redemption," he plays Red, a wise prison inmate opposite Tim Robbins.

His deep voice has made Freeman the US version of Sir David Attenborough, commanding authority every time he opens his mouth. Click through the gallery above for a look at Freeman's best films.

Everything you need to know before watching 'Pirates of the Caribbean: Dead Men Tell No Tales'

Johnny Depp makes his comeback at Jack Sparrow in "Pirates of the Caribbean: Dead Men Tell No Tales," opening this week around the world. Here's a look at the pirate's 14-year career and a fact check from the series. (24.05.2017)

Best known for playing James Bond, British actor Roger Moore enjoyed a long career in both TV and film. He was also a dedicated philanthropist. Moore has passed away in Switzerland following a battle with cancer. (23.05.2017)