German beach lovers don't have to head to the Med for a bit of sand and waves. Up on the North Sea a string of islands offers plenty of dunes and shore for beachcombing -- and the archipelago is growing. 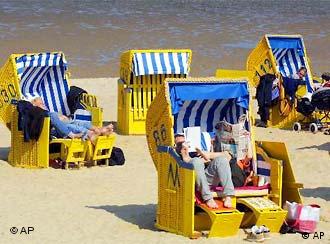 Now more space for tourists on the North See

Germany's North Sea islands, particularly Spiekeroog, Borkum, Nordeney and Mellum, are growing, not only in popularity among tourists, but in actual size. A new study conducted by the national park service in Lower Saxony shows that four of the eight islands are actually bigger today than they were 40 years ago.

Between 1966 and 1997 the islands, which are located in the Wattenmeer (mud flats) National Park, increased in area as the sand dunes and salt water marshes expanded. 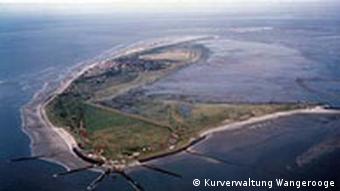 Aerial photo of the island Wangeooge.

The growth was measured with aerial photos taken over the years. The national park examined the images and recorded the differences throughout the decades. One of the primary changes noted was that the eastern end of the four islands extended further and further into the sea.

The park service sited changes in the patterns of water currents which caused more silt to be washed up and deposited on the islands.

The so-called East Frisian islands are surrounded by a fragile eco-system that is protected by the National Park. The islands themselves, except for the bird island Mellum, are inhabited. During the summer months, they are often overcrowded as Germans from mainland Lower Saxony and Hamburg flock to the extensive sandy beaches.

Sylt: In Winter, a Mellower Pleasure

Winter on the popular beach resort of Sylt means icy grey waters under a dark sky, bracing sea air, heavy surf -- and above all, more calm than in summer.

Official Web site with information in English on the ecology of the mud flats.