More arrests in Baku on eve of Eurovision song contest

The government meant to use it to cast Azerbaijan as a progressive country, but instead it has turned into a public relations nightmare. Dozens more were arrested in Baku on the eve of the Eurovision finals. 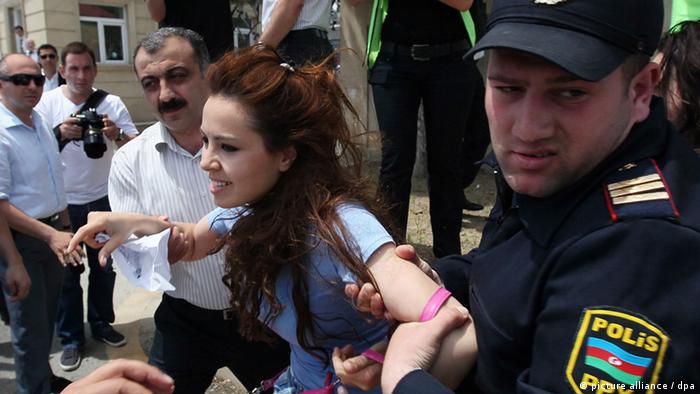 Police in Azerbaijan's capital, Baku, arrested dozens of opposition demonstrators on Friday, one day before the finals of the Eurovision song contest.

Around 200 protesters were shouting slogans demanding more democracy on a busy street in central Baku when police moved in to pull out about 30 of them and cart them away in waiting vans, according to the contact.az website.

The relatively small anti-government rally had attracted many journalists and observers, some from the Organization for Security and Cooperation in Europe.

"I must say I did not expect them to crack down like this," Anders Nielsen of the Norwegian Helsinki Committee told the AFP news agency. "What we are seeing here is a totalitarian regime that cracks down on anything that looks like opposition," he said.

The government of President Ilham Aliyev has been taking great pains to try to use the international media attention generated by its hosting of this year's Eurovision song contest to paint Azerbaijan in a positive, progressive light. It has given the capital a $60 million (48-million-euro) facelift over the past year, including constructing a new 23,000-capacity arena to host Saturday's event.

Opposition activists have held a series of rallies and marches over the past month in an effort to use the glare of the international media to highlight alleged human rights abuses. Police have repeatedly broken up demonstrations and detained protesters.

The efforts of the opposition activists in the oil-rich country of nine million have not gone unnoticed abroad. The German government's human rights commissioner, Markus Löning, on Friday condemned the manner in which the government has been cracking down on protesters as unacceptable. He said Aliyev's government apparently hadn't expected the foreign media to give so much attention to dissent in the country.

"The government in Azerbaijan is unable to cope with this situation," Löning said in an interview with German public radio.

The Eurovision song contest is an annual event that is broadcasted live on television across Europe and attracts an estimated audience of 125 million people.

Azerbaijan, which earned the right to host this year's event when its entry won last year's contest in Germany, is the eastern-most country to do so. It is also the fifth former Soviet Republic to earn that right, after Estonia, Latvia, Ukraine and Russia.