Beatrix von Storch, deputy leader of the AfD, has claimed that her account has been suspended for not paying her mandatory fees for Germany's state media. A woman was also jailed for two months for non-payment. 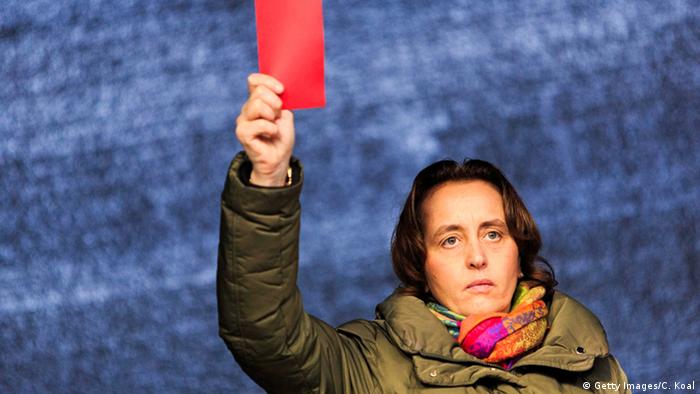 Beatrix von Storch, who has gained a reputation as a media-baiting member of Germany's populist right-wing party Alternative for Germany (AfD), has long waged a campaign against state media outlets, and especially the mandatory fee - 17.50 euros ($20) per month - that all households must pay for them.

Now she has claimed that her account with the fee collection service (still commonly known as the GEZ) has been suspended for non-payment.

In a tweet published on Monday evening, von Storch wrote: "Now it's happened, the GEZ has seized my account. On April 1, as I have just found out..." She added a link to a Facebook post that has since been deleted. When contacted by DW, the GEZ said it could not confirm or deny von Storch's claim on data protection grounds.

On the same day - coincidentally or not - a woman was freed from prison after a court in Chemnitz had admitted that they had kept her in custody for 61 days because of her refusal to pay the GEZ fees.

Regional state broadcaster MDR applied for an arrest warrant against Sieglinde Baumert in September 2015 in an attempt to force her to sign a statement about her assets, which she refused because, as she told "Die Welt" newspaper, "With my signature I would confirm the legality of the mandatory fees."

On Monday the MDR backed down, after Baumert's story was widely reported, and withdrew its warrant application.

Baumert, who has not paid the GEZ fees since they became mandatory at the start of 2013, explained to "Die Welt" why she was refusing to pay. "I feel patronized, I get the decision taken away from me about what I'm paying my money for." Citing the fact that she has no interest in football, she added, "And when I then read that a minute of a sports show costs 40,000 euros, I wonder why I should invest a cent in that."

Baumert has an ally in von Storch, though the politician's reasons for refusing to pay are related to the political content produced by the state outlets. On March 19, she posted a satirical song from a ZDF comedy show about her party that compared the AfD to Nazis. "State-enforced fees financing propagantainment, or is this incitement via entertainment?" she wrote. "Why I won't pay the GEZ voluntarily? Because of such unbelievable pieces that rile up some morons who, because of the slander that I want to 'burn negro children,' might decide to do the same to me. Abolish the GEZ! Education not propaganda. Debate not incitement."

Her stubbornness might be futile - at least for now. Germany's Federal Administrative Court ruled on March 18 that the fees were legal, though the Constitutional Court has yet to weigh in on the matter. 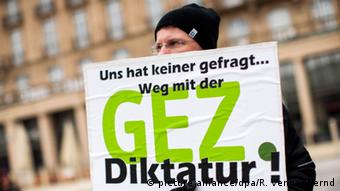 The ARD says some 4.5 million people are behind on their GEZ payments, though statistics on why these fees have not been paid have not been gathered. And though it's not exactly clear how many refuseniks there are in Germany, lawyers say there are more and more of them.

"A lot of people simply didn't understand when the system was changed - it just wasn't communicated well enough what you're actually paying for," said Sascha Giller, of the law firm PWB, which hopes to take the case to the Constitutional Court. "That means we have had a massive influx of clients who are resisting the forced payments."

PWB is currently representing around a thousand clients who are refusing to pay their GEZ fee - but, Giller underlined, their reasons are myriad.

"A lot of them criticize the content, including the political orientation - along the lines of 'it's a propaganda broadcaster' - and we have others who say that on principle public broadcasters as such no longer have a place in the modern world, at least not with obligatory fees," he told DW. "And we have clients who just don't use the media ... also we have businessmen who don't see why they should have to pay it again for their second home."

Another lawyer who represents GEZ refuseniks, Jakob Heinrich Tschuschke, said the legal battle isn't over yet. "I still think it's unlawful, even if the courts are of a different opinion," he told DW. "I'm keen to see what the constitutional court says."

DW's Tim Sebastian spoke to Frauke Petry, leader of the right-wing Alternative for Germany (AfD) party in Leipzig on 21 March, 2016. This is the official transcript. (30.03.2016)

A local branch of the Alternative for Germany (AfD) party wants to ban all mosques, according to a leaked draft policy. The right-wing party is working on its official manifesto ahead of a party conference in April. (30.03.2016)