Evo Morales has been elected for a third term as Bolivia's president in a landslide victory over his opponents. Morales's social welfare programs have made him wildly popular among the country's poor and working classes. 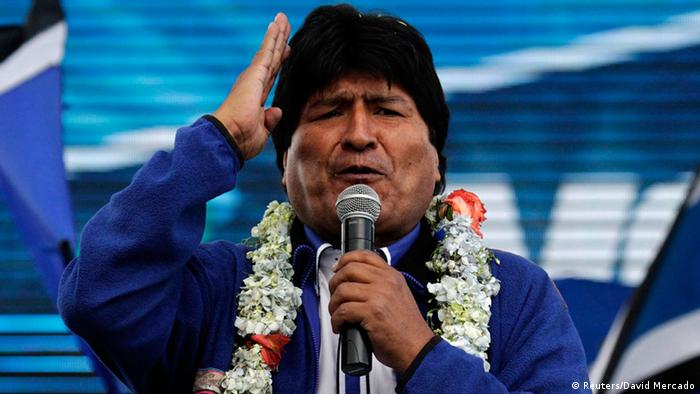 Morales declared his victory in Sunday's presidential election a "triumph for anti-imperialists and anti-colonialists," vowing to forge ahead with socialist economic policies that have nationalized key industries and reduced widespread poverty.

"We are going to keep growing and we are going to continue the process of economic liberation," Morales told supporters from the balcony of the presidential palace in the national capital, La Paz.

The two-term incumbent won more than 60 percent of the vote, according to unofficial exit polls. His closest rival, businessman Samuel Doria Medina, trailed with just 25 percent.

Evo Morales: He came, he saw, he conquered

Evo Morales, Bolivia's first indigenous president, will most likely be reelected into office for a third time. But who is this man in the black leather jacket who has changed the face of Bolivia? (11.10.2014)

Morales has redistributed wealth from a natural gas boom into social welfare programs and infrastructure projects, lifting half a million Bolivians out of poverty since 2006. The South American nation has grown by 5 percent annually and has maintained fiscal surpluses.

A native Aymara born in poverty, Morales is the first president from Bolivia's Amerindian communities, which make up around 55 percent of the population. He previously led a union for cacao growers, adding to his common man image.

"I voted for Morales," said Flavia Nunez, a 50-year-old office clerk, in central La Paz. "These other right-wing candidates would take us back in time. I don't want that."

Critics have accused Morales of monopolizing political power and undermining press freedom by allowing allies to buy out critical media.

"There is no functional opposition, left, right or otherwise," said Jim Shultz, executive director of the left-leaning Democracy Center based in Bolivia and San Francisco.

Although a recent constitutional change limits the president to two terms, a court ruled that Morales could run a third time, since his first term preceded the change.

"This government has had two terms and I don't like it when a small clique lingers on in power," said 53-year-old Miguel Angel Perez, an economist.

Morales has been more controversial abroad, particularly in the United States. He has sought to adopt a foreign policy independent from Washington, cultivating ties with countries such as Cuba, Iran and Venezuela.