For international fans, nobody gives a better impression of the quintessential Brit than John Cleese. The Monty Python co-founder has been facing criticism for his political remarks. He now turns 80.

"I feel like I'm 43," John Cleese told UK talk show host Lorraine Kelly not too long ago, adding that he'd make sure no members of the Monty Python comedy group show up for his 80th birthday on Sunday, October 27. That might or might not have been a joke, which is as difficult to say as where the famous comedian is planning on celebrating the event.

John Cleese was born on October 27, 1939 in Somerset. At 1.96 meters Cleese was already taller than most adults when he was just 13. He was the butt of many a joke, but would react with humor when teased, just like he did when his emotionally cold mother invariably introduced him with the words: "He was an accident." John Cleese was in therapy for years, and his relationship with women was strained into adulthood, he once said. He is currently on his fourth marriage.

Read more: Silly walks: Python fans get into their stride in Budapest

Cleese studied law in Cambridge, where he also began to act in plays. After finishing law school, he wrote a radio comedy for the BBC, toured with his theater group and eventually, he and five other actors founded the Monty Python comedy group. In 1969, the BBC commissioned the ensemble to create a TV series — without an inkling of what the comedians would come up with. As a result, the first episodes of Monty Python's Flying Circus,a show that was to become cult,were broadcast very late at night. 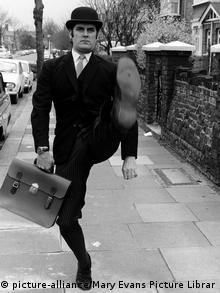 Cleese left the show after three seasons. Along with his first wife, he wrote Fawlty Towers,a sitcom in which he played a sarcastic hotel manager by the name of Basil Fawlty.

Six years earlier, the group had broken up after their award-winning musical sketch comedy film from 1983, The Meaning of Life. John Cleese in particular said he no longer wanted to have to compromise as much. "I no longer wanted to be part of a group that outvoted me," he told the German news magazine Der Spiegel in a 2015 interview — a year after he got together with the old gang for a night of songs and sketches in The Last Night Of Monty Python. Tickets for the last joint performance were sold out within a minute, so the show was broadcast in about 1,500 cinemas all over Europe, with about 450 movie theaters showing the event live.

Cleese wrote the screenplay for a film that became one of his greatest successes, the 1988 comedy A Fish called Wanda. In it, Cleese embodied his favorite character, an uptight British snob. He played the ingenious inventor Q in two James Bond movies and a ghost in the first two Harry Potter films, as well as lending his voice to numerous characters in animated films.

John Cleese was active outside the film industry, too. He co-wrote a self-help book on family life with his former therapist, Robin Skynner; he edited brochures for the Dalai Lama, shot documentaries and served as Rector of the University of St Andrews. The comedian declined a Commander of the Most Excellent Order of the British Empire (CBE) from the Queen.

For years, Cleese lived in Santa Barbara, California. He briefly returned to England before moving to the Caribbean island of Nevis, not without voicing displeasure about his native country, saying that he voted for Brexit to protest "bureaucratic control." The fact that Nevis is a tax haven should be duly noted. 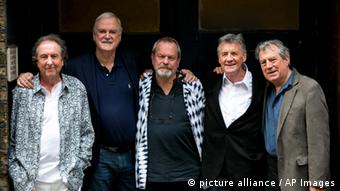 Monty Python got together for a reunion in 2014

The former Monty Python faced criticism for commenting that London was no longer an English city," referring to its multicultural population. "These comments make John Cleese sound like he's in character as Basil Fawlty," said London mayor Sadiq Khan. "Londoners know that our diversity is our greatest strength."

'Always look on the bright side of life'

As wildfires ravaged California late last year, a jocular remark on Twitter about grilled food also antagonized people. "I love John a lot," his Monty Python colleague Terry Gilliam once said. "But I just don't agree with the way he sees the world."

Whether we are seeing an aging comedian threatening to lose his sense of timing, or whether John Cleese is actually more like some of the characters he has personified than we thought, he's 80th birthday is an opportunity to remind him: "Always look on the bright side of life!"

In the eleventh hour, British PM Theresa May recoiled to delay a decision on her Brexit deal. The move may save her government for the time being but makes a hard Brexit is more likely, writes Barbara Wesel. (11.12.2018)

From Monty Python to Shrek: A selection of John Cleese films

Along with his celebrated Monty Python movies, John Cleese wrote other movies too — one of which he sees as the greatest mistake in his life. A look back as the comedian turns 80. (25.10.2019)