The tight, skin-tone dress that Marilyn Monroe wore while singing 'Happy Birthday, Mr. President' to John F. Kennedy in 1962 has fetched $4.8 million at auction. The actress died just months after the renowned rendition. 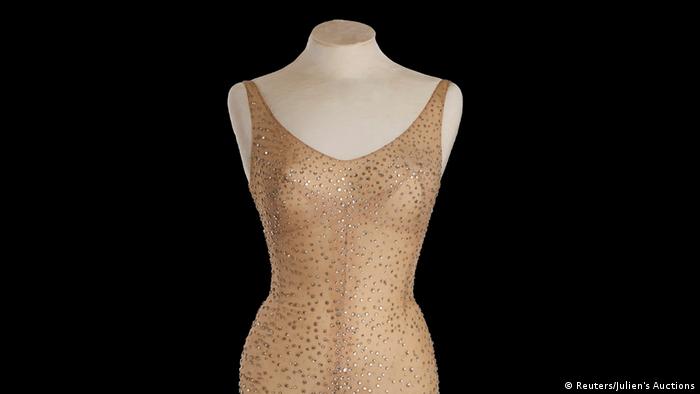 Julien's Auctions put the dress on the block late on Thursday, the first day of a bumper three-day auction set to include over 1,000 items belonging to Monroe. The winning bid of $4.8 million (4.5 million euros) came from the American museum chain Ripley's Believe It or Not.

"Marilyn Monroe singing 'Happy Birthday, Mr. President' is certainly one of the most famous impromptu performances in American history," said Darren Julien, president and CEO of Julien's Auctions. "We were incredibly privileged to have had the opportunity to offer this amazing dress from the most legendary screen star of all time."

The actress had to be sewn into the tight dress minutes before her performance at the Democratic Party fundraiser in Madison Square Garden in New York. The gala was held weeks before President John F. Kennedy's 45th birthday in 1962.

At the time, the sequin-covered gown reportedly cost $12,000.

Monroe's breathy rendition of "Happy Birthday" is deeply ingrained into American culture, as it helped fan the rumors of an affair between her and President Kennedy.  Monroe died of a drug overdose less than three months later, and Kennedy was assassinated the following year.

The dress was auctioned off to late fund manager Martin Zweig in 1999 for $1.26 million. Zweig bought the dress as an investment and kept it in a climate control cabinet, according to the auction house.

Although the Thursday sale surpassed the expected value of between $2 million and 3 million, it is still below the record price for a Monroe dress. The frock she wore while standing above a subway grate in "The Seven Year Itch" fetched $5.5 million five years ago.