The Benedictine monastery of Corvey was declared a UNESCO site a year ago. On Tuesday Foreign Minister Frank-Walter Steinmeier handed over its official letter of appointment. 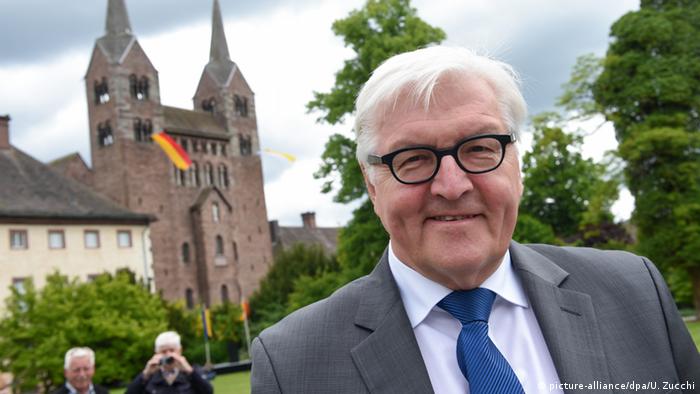 On Tuesday, Foreign Minister Frank-Walter Steinmeier and the Chairperson of the World Heritage Committee, Minister of State Maria Böhmer, ceremoniously handed over the official documents to the owners. A world heritage plaque was then later unveiled in the atrium. The former Benedictine abbey, with its famed western facade, had been declared a UNESCO site of world culture in June 2014 by the UN's peak culture organization.

"Nothing is self-evident, if we do not actively seek to preserve it," Steinmeier urged. The Monastery of Corvey was akin to the heritage sites of Palmyra in Syria, currently under threat by IS militants, and helps us answer "where do we come from, on whose shoulders do we stand, where did the crucial stages of mankind's development take place."

There are almost 1000 world heritage sites worldwide, with Germany boasting 39 of them. The Benedictine monastery of Corvey was founded in 822 by the ruling family of the Carolingians. The imperial abbey was at the spiritual and religious centre of the Frankish empire. Although redesigned in the 12th century, the original westwerk remained almost wholly preserved, and is flanked by two towers whose splendor are reminiscent of the builder's ambition. The red towers overlook the long white building, which was transformed into a castle in the 19th century.

Today Corvey Castle is the possession of the ducal family of Ratibor, and the baroque abbey the home of the Catholic parish of St Stephen and St Vitus. The castle's two owners are now bound to preserve the building's heritage, with four million euros of funding to aid in the preservation and development of tourist infrastructure. Prior to its UN appointment the World Heritage site annually attracted up to 100,000 visitors.