Moldovan president accuses Romania of being behind protests | Europe | News and current affairs from around the continent | DW | 08.04.2009

Moldovan riot police have regained control of the president’s office and parliament building after they were ransacked by protesters claiming last weekend's elections were rigged. 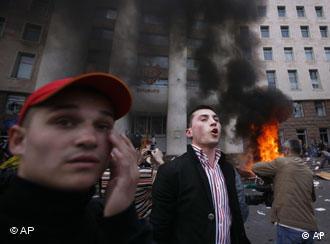 Anti-communist demonstrators have been protesting outside the Moldova parliament building.

Witnesses in the capital, Chisinau, said an estimated 100 riot police surrounded the buildings early on Wednesday, but not before protesters had stormed them, setting fire to furniture and tossing computers out of the windows. 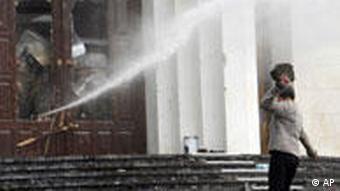 An elderly woman throws a stone at riot police inside the presidential palace.

Opposition calls for a recount of the vote were dismissed by Russian Foreign Minister Sergei Lavrov, who said the demands were “absolutely groundless.”

Lavrov stressed that international observers from both western European bodies and a bloc of former Soviet states led by Russia had endorsed the Moldovan vote in a rare display of unity. The OECD observer mission said the vote had been free and fair.

Referring to the “abundance of Romanian flags” used by protesters, Lavrov also cautioned the European Union against trying to exploit the situation in Moldova. Europe's poorest country had been part of EU member Romania until World War II, when it was annexed by the Soviet Union.

Moldovan President Vladimir Voronin accused Romania on Wednesday of being complicit in the mass demonstrations of up to 20,000 mainly youthful protesters. Voronin declared Romania's ambassador “persona non grata” and ordered him to leave Moldova. 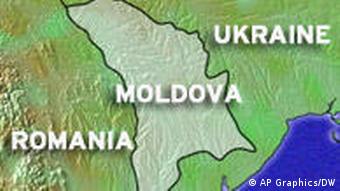 A crowd of several hundred anti-government demonstrators gathered in central Chisinau on Wednesday, blocking traffic on the city's main thoroughfare, but police made no moves to interfere.

“The protests will continue until a date is set for new elections,” said Chisinau Mayor Dorin Chirtoaca, the deputy head of the opposition Liberal Party, which lost to the Communists in Sunday's vote.

The European Union has called on all sides to refrain from violence and provocation.

Communists sweep back to power in Moldova elections

The Communist Party of Moldova won a decisive victory in the ex-Soviet republic's parliamentary elections. (06.04.2009)

The breakaway republic of Transnistria declared independence in 1990 as the Soviet Union dissolved. But no government recognizes it and the international community supports Moldova's territorial claim over the region. (03.12.2008)

The European Union presents a partnership proposal for its eastern neighbours. (02.12.2008)