Minister′s Resignation Attempt a Bad Sign for Merkel′s Government | Germany | News and in-depth reporting from Berlin and beyond | DW | 08.02.2009

German Chancellor Angela Merkel was reported Sunday to have turned down an offer from Economics Minister Michael Glos to resign. But some experts say they don't expect him to remain in the position for too much longer. 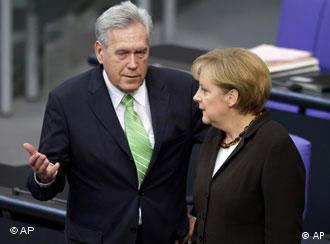 In the midst of a finance crisis, Glos picked a bad time to resign, said some commentators

The newspaper Bild am Sonntag said the chancellor and Foreign Minister Frank-Walter Steinmeier wanted Glos to remain in office until general elections are held on Sept. 27.

Glos, a member of the Christian Social Union (CSU) -- the sister party to Merkel's Christian Democratic Union, had offered to resign on Saturday, but he was immediately turned down by his party boss, Horst Seehofer.

In a letter to Seehofer, 64-year-old Glos cited his age and the need for the CSU, after disappointing state election results last September, to renew itself ahead of this year's national polls.

Merkel has not officially commented on the matter, but Steinmeier indicated the minister's action was related to internal quarrels within the CSU, the most junior of the three parties that form the ruling coalition in Berlin.

The CSU "is taking part in a steeplechase. I've no idea what the outcome will be," Steinmeier told national public broadcaster ARD. The foreign minister is the Social Democratic Party's candidate for the chancellery in the upcoming federal elections.

Despite having his resignation turned down, Reuters news agency quoted anonymous sources saying they did not expect him to stay in his position too much longer. The online edition of the daily Sueddeutsche Zeitung also reported on Sunday that Glos would be replaced soon.

Instability in the conservative Christian parties leadership has given Steinmeier an opportunity to criticize Merkel's handling of the economic crisis.

In an interview with Der Spiegel newsmagazine to be published on Monday, Steinmeier said Merkel and her allies were "incapable of finding the right way to face the (economic) crisis."

"It is only thanks to the SPD that Ms. Merkel, as chancellor, has been able to make the right decisions," said Steinmeier, who currently acts as vice-chancellor. He had previously been more cautious in criticizing Merkel so as not to upset the uneasy coalition.

Bad timing for a resignation

The daily Tagesspiegel on Sunday noted that Glos picked a particularly awkward time to submit his resignation as Germany is struggling to come to terms with a harsh recession that has seen growth fall, unemployment rise and credit dry up. 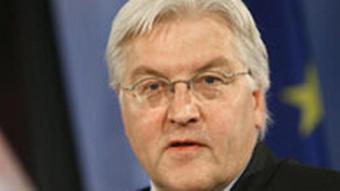 "Michael Glos offers to leave at a time when Germany, Europe and the whole world find themselves in the worst economic crisis of the last decades and countless decisions are expected of this ministry that could be decisive for the economic future of the whole country," opined the paper.

As economics minister, Glos was often in the shadow of the popular Finance Minister Peer Steinbrueck. That was most apparent last month when the government announced a 50 billion euro ($65 billion) fiscal stimulus package to help Europe's biggest economy weather the economic downturn.

Glos has headed the economics ministry since November 2005 when Merkel's Christian Democrats and the CSU took office in a grand coalition with the center-left Social Democrats. He joined the CSU since 1970 and was elected to parliament in 1976. Before moving to his Cabinet job, he was leader of the CSU parliamentary group in Berlin.

Formally, Merkel is responsible for Cabinet appointments, but in line with tradition, the parties in the ruling coalition propose replacements for their own members who leave the government.

"It is damaging for Germany to hold on to an economics minister who has called 'get me out of here,'" she said in a reference to the popular reality television series "I'm a Celebrity Get Me Out of Here."

In a surprise move, German Economics Minister Michael Glos offered to resign Saturday, less than eight months before the country votes in a general election, but the offer was promptly turned down by his party boss. (07.02.2009)

Chancellor Angela Merkel has promised a tax cut if re-elected this fall. Yet some conservatives in her party are not sold on the idea. (02.02.2009)