Middle finger criticized in German campaign | Germany | News and in-depth reporting from Berlin and beyond | DW | 14.09.2013

With just over a week until Germany's federal elections, Social Democratic chancellor candidate Peer Steinbrück flipped the bird on the cover of a magazine. The gesture set off a debate on how politicians should behave. 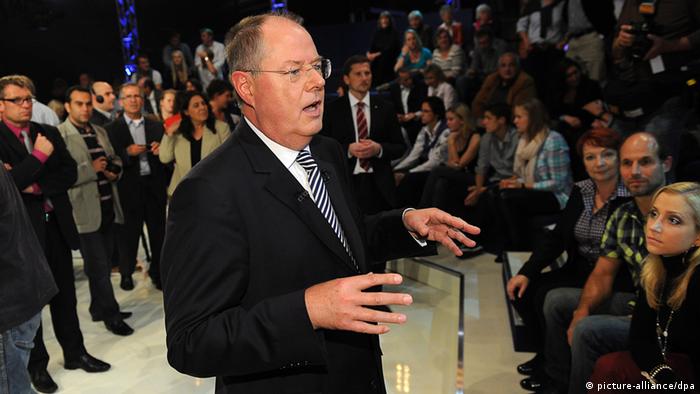 The SPD candidate's obscene gesture is the talk of the town

The Social Democratic Party's candidate for chancellor in next weekend's elections, Peer Steinbrück, created an uproar when he flipped up his middle finger during a pictorial interview for a weekly magazine included in the daily Süddeutsche Zeitung on Friday (13.09.2013). One of a series of seven photos, the middle-finger picture was printed on the cover of the magazine and was a response to a question about the nicknames journalists have given him.

The image went viral online and launched the Twitter account @peersfinger, put #stinkefinger, German for the offensive middle finger, at the top of Twitter's list of trending topics and launched surveys at several news websites asking users what they thought of the gesture.

While many in the established media were indignant and political opponents fumed over the photo, Steinbrück responded to the media uproar in an interview and said, "Where are we going to end up if we can't laugh?" Users' comments on social networks ranged from anger about a candidate who doesn't care about voters to amusement and approval. A number of photo collages later featured Steinbrück's finger superimposed in a number of other situations, including picking various politicians' noses and being licked by a giraffe. 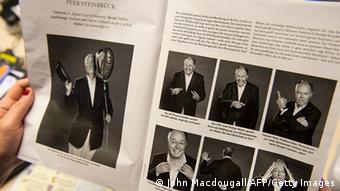 Inge Wolff, a member of an international etiquette group that offers lessons in manners to businesses, said using irony is such a way is a dangerous business. "Many people won't understand it," she said. "Or it backfires because some people see it as offensive or discriminating."

Steinbrück said he did not intend to offend anyone and added that while he did approve the magazine's use of the photo, which was taken weeks ago with his knowledge that it would run just over a week before Germany's federal election, he did not know it would be featured on the magazine's cover.

Yet some Twitter users found the candidate's action showed his disdain for voters and that he was not serious about leading Germany.

"People who spend a lot of time in the public eye are automatically seen as examples, whether they want it or not," Wolff said. "And many of them don't pay attention to that."

Felix Flemming, a political scientist at the University of Münster, called the discussions about the photo much ado about nothing. He said the established media that were upset about Steinbrück's gesture were the same outlets that accused politicians of only taking part in scripted events and not showing any spontaneity or personality.

"When [politicians] are honest, like Steinbrück on this cover, then it's called a major blunder or scandal," he said.

One Twitter user called out the magazine for posing pointless questions to someone running for Germany's most powerful political position: "Steinbrück's middle finger finally gives an authentic answer to a stupid media question. #ilikeit #stillwon'tvoteforhim."

Other users said they preferred Steinbrück's emotion to Chancellor Angela Merkel's calculated manner. "Steinbrück's middle finger is 10 times better than the chancellor's folded hands," one user wrote referring to Merkel's habit of pressing together her thumbs and index fingers. 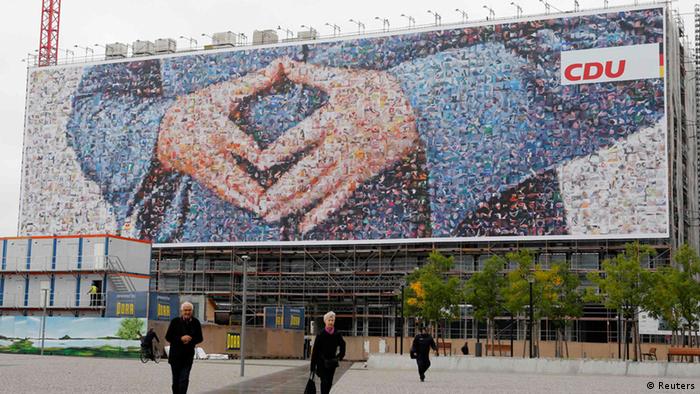 Flemming said he did not think "Peer's Finger Scandal" would have a measurable influence on the election. "I can't imagine that someone who was not going to vote for Steinbrück will cast a ballot for him because of this cover."

That's led some online to ask politicians and the media to get back to the issues that concern Germany and the world. "After the excitement over @peersfinger, could we get back to talking about who is going to lead the country? Thanks."

Can body language win you votes?

Hardly anyone reads manifestos, instead many judge politicians based on personal impressions. Gestures, facial expressions and symbolic actions play a significant role and vary worldwide. But how important are they? (10.09.2013)